The magic of aquafaba is at it again! This vegan tiramisu recipe is made with homemade ladyfingers made with aquafaba instead of egg whites, cultured cashew mascarpone, and coconut cream. Save for the non-dairy yogurt used to culture the mascarpone, every ingredient in this dessert is made from scratch (you'll need 2 days for prep, so plan accordingly!) Plus, there are ways around using store bought yogurt, like culturing the cheese with a different probiotic like rejuvelac or sauerkraut juice.

If you've never had tiramisu before, here's the scoop: crisp spongy Italian cookies called ladyfingers dipped in espresso and coffee liqueur, then layered with a sweet mascarpone-based custard, and topped with chocolate shavings and/or cocoa powder. While many non-vegan tiramisu recipes use store bought ladyfingers, they are off limits for vegans because they are made with egg whites. So, you need to make your own!

Since aquafaba mimics egg whites in baking, I was able to make a ladyfinger recipe closer to the traditional egg-laden recipe. My recipe includes vegan butter and coconut cream, and fat and moisture are known to make whipped aquafaba deflate. This is why it's important to gently fold the ingredients together, rather than throwing everything in the bowl. The aquafaba will still significantly deflate once you have a dough, and you may not make a perfect batch the first time, but keep trying!

I experimented with making a fat-free ladyfinger cookie to keep some of that volume, but it was sticky, crunchy, and disgusting, so don't try that!

Then you'll continue dipping your ladyfingers in the espresso, and start to line them up in the bottom of the pan. We'll need two layers of cookies, so each layer of ladyfingers should use about half of the cookies.

If you're thinking the ladyfinger layer looks a little sparse, I agree! I ended up having fewer ladyfingers than expected, and too much of the mascarpone mixture, so I updated the ratios for the recipe. If you follow the recipe, you will not have this problem if using an 8x8-inch pan. Since the tiramisu is chilled rather than baked, you can use any type of pan for your tiramisu, or make parfaits instead!

For the Cultured Cashew Mascarpone:

For the Vegan Ladyfingers:

• The mascarpone recipe is based on Miyoko Schinner’s recipe for cultured cashew cream cheese. The process is exactly the same, but mascarpone only needs 12-24 hours of culturing. To make cream cheese, you’ll culture the mixture for 24-48 hours instead for a tangier flavor.
• To get coconut cream for the Vegan Ladyfingers and the filling, place a can of coconut milk in the refrigerator for 24 hours, or at least overnight. The cream will separate from the water in the can and solidify so you can scoop the cream off the top for use in this recipe.
• If you’re not confident in your cashew culturing or are short on time, you can replace the mascarpone with store bought vegan cream cheese.

After your tiramisu has chilled for 6 hours, you'll sift some cocoa powder to cover the top. You could also use dark chocolate curls, or both.

And your tiramisu is ready to serve!

It's kind of a messy (but delicious) dessert. And as mentioned before, my cookie to mascarpone ratio was a little bit off, so you should have a more structurally sound dessert since I tweaked the recipe.

Try these other vegan Italian or Italian-inspired desserts!

These vegan Italian Rainbow Cookies or "seven layer bars" or "Napoleon cookies" are made of three layers of almond cake spread with apricot jam, and coated in chocolate. When cut, the Italian flag is revealed.

This chocolate cake calls for olive oil instead of vegetable oil or vegan butter, and it has a strawberry cream cheese frosting and strawberry jam filling. 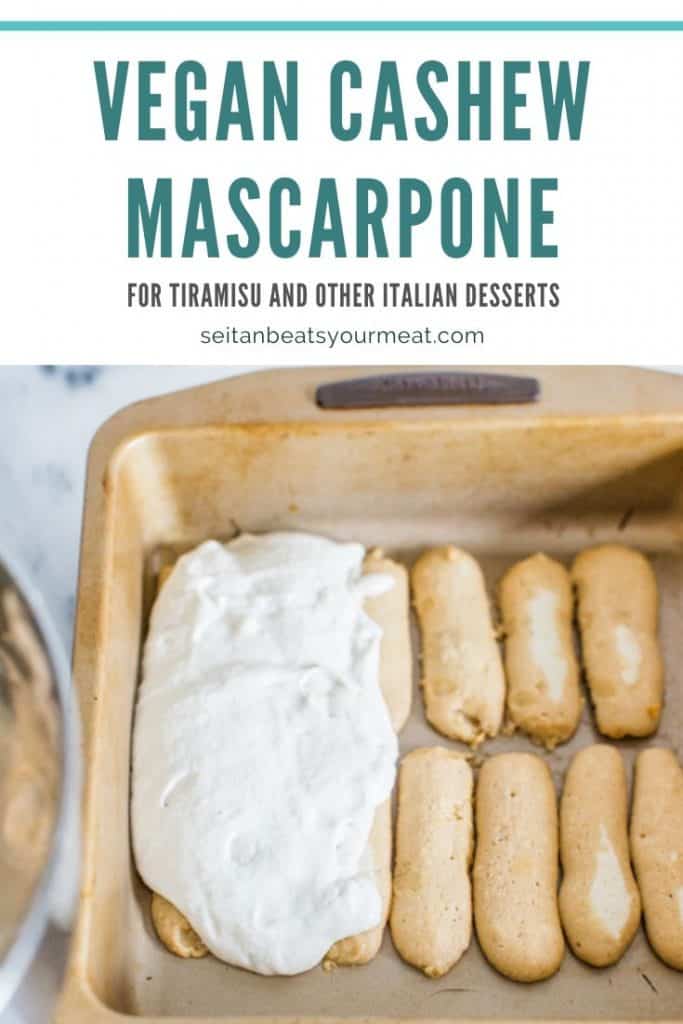 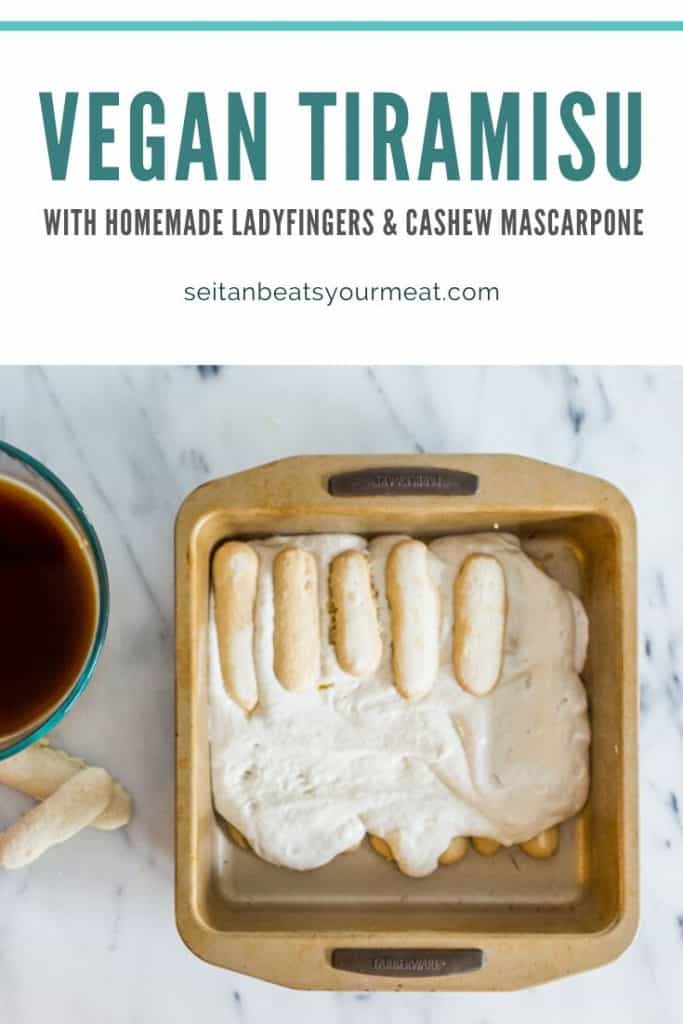