Repeat after me: Thanksgiving is all about the side dishes. I know it, you know it, we all know it. Since it’s easy to swap out the animal products in those side dishes with vegan versions, Thanksgiving can be the most vegan-friendly holiday if you make it! I’ve compiled some of my favorite vegan Thanksgiving recipes in this menu. Use the recipes or use this menu as inspiration to veganize your family recipes.

I revisit this Thanksgiving guide every year and swap out some recipes and products for new recommendations. It’s called Semi Homemade because it’s okay to cut yourself a break and buy some of the dishes pre made, or from a can, especially this year. Even if this year won’t be a traditional Thanksgiving, you can still indulge in all of the traditional dishes. It’s all about prioritizing and taking some time to relax.

Maybe you thought about slow roasting a pie pumpkin and blending it into velvety pumpkin pie filling for your homemade coconut butter crust. But when it’s 24 hours before Thanksgiving and you’re boiling potatoes while W-ing FH, there might not be time for that. Using canned pumpkin and/or a pre-made crust is absolutely okay and will leave time for you to effectively channel your inner Martha Stewart. Or since you’re staying home, make it a Thanksgiving weekend! There are no rules.

It’s okay to heavily lean in to the “semi” part of that “semi homemade” since making a full vegan Thanksgiving dinner is a lot of work! If you’re going to make three side dishes and a dessert, do yourself a favor and pick up a store bought roast. Or vice versa. Whichever one involves the least amount of grocery shopping. Let’s do this!

The main course is the obligatory course on which to serve the Thanksgiving sides. We all know it. Apparently even omnivores aren’t fans of Thanksgiving turkey.

While I’d argue that vegan roasts are much more delicious than what I remember of turkey from before I was vegan, let’s keep it simple. I feel like I’ll be repeating this phrase throughout this post, but especially this year when you’re responsible for most or all of the cooking due to (responsibly!) not attending a large gathering.

I have one go-to recipe if I’m going to make a roast, but lately I prefer to buy a store bought roast.

If you’re going to make your own roast, the Seitan en Croute recipe from Just the Food is my pick. I love me some Joni recipes (and Joni herself!) and I’ve made her Seitan en Croute for Thanksgiving several years in a row. If you’re traveling a short distance, you can cook the entire roast ahead of time, then hope you’ll get 15 minutes of oven time to heat it up before dinner at Mom’s house.

Even if you planned to make your own seitan roast and thought about standing over the sink washing the starch out of wheat flour for an hour because you’ve never tried making seitan the old-fashioned way, it’s okay to purchase a boxed version instead! We’ve finally arrived to a golden age where vegan food is accessible almost everywhere from fast food joints to fine dining. That applies to grab-and-go vegan Thanksgiving dinner too.

When I’m not cooking Thanksgiving dinner, I go for the Trader Joe’s Turkey-less Stuffed Roast with Gravy. This roast is breaded, stuffed with cranberry-studded wild rice, and seasoned with herbs and red pepper flakes. It comes with a decent amount of gravy for 1-2 people, but if you’re feeding more people or plan on eating multiple helpings, you might want to make some more.

Tofurky Vegetarian Feast: Tofurky is the classic…Tofurky. It’s become a household name that may or may not refer to the actual brand, but any holiday meatless roast. The Tofurky is stuffed with wild rice and bread crumb stuffing, and comes with a simple gravy.

Gardein Stuffed Veggie Turkey Roast: if you’re a fan of other Gardein products but have yet to try their holiday roast, perhaps the time is now! Gardein offers a turkey-free roast with cranberry wild rice stuffing and a side of gravy.

If you live near Native Foods, other vegan restaurants, or veg-friendly co-ops, there’s a good chance one of these places will be offering Thanksgiving to-go! They might even take care of your side dishes as well. Check out your favorite restaurant’s Facebook page to see if there’s still time to order.

Side dishes are usually the best part of Thanksgiving dinner, right? Mashed potatoes and gravy, stuffing, cranberry sauce, and veggies… Main dish who?

Stuffing is an essential Thanksgiving side dish, and I love making this classic Sage Stuffing with parsley and thyme. If you’re in a hurry, you can use bagged stuffing like Pepperidge Farm, which is vegan.

Would it even be Thanksgiving without Green Bean Casserole? My version swaps canned green beans for fresh, and is made with homemade Cream of Mushroom Soup to replace the non-vegan mushroom soup in a can.

Your Thanksgiving dinner plate is prime real estate for comfort food, and comfort food is filling! It you can spare some space for a lil salad, this Roasted Squash & Pear Fall Salad is the one to make.

You could serve this bread on the dinner table and eat it with vegan butter and cranberry sauce, but it will really shine the next day if you use it for your Thanksgiving leftovers sandwich! Since it’s a yeast bread and the flavor is subtly sweet, it makes an excellent sandwich bread.

Like I have to tell you that Thanksgiving is all about pie! You need at least 2 of them, and preferably another dessert like cake or ice cream. Make this category a priority!

You need pumpkin pie. Or apple pie. Or your favorite kind of pie. I’m a fan of this pumpkin pie from The Post Punk Kitchen.

My Grandma makes this cake every year, so I made my own vegan version. It’s a fluffy pumpkin cake, not overly spicy, topped with cream cheese frosting.

This recipe from my drink-inspired dessert cookbook Cheers to Vegan Sweets is a good one to pull out for vegan Thanksgiving. Try making them into donut holes instead of full-sized donuts so you’ll have enough room to sample every dessert.

If you love vegan pastries and desserts, or are looking for a gift for a vegan-curious friend for the holidays, I currently have Cheers to Vegan Sweets on sale in my shop for $9.99! There’s tons of recipes you’ll want to make this holiday season like Chocolate Nog Cupcakes, Champagne Mousse Petit Fours, and Buttered Rum Cashew Brittle.

This S’mores Pie has a creamy chocolate filling and aquafaba meringue topping! The crust is made out of graham cracker dough, which gives it a soft, cookie-like texture with graham cracker flavor.

This is probably a category you don’t have to think about if you’re going to a relative’s home for Thanksgiving. There’s probably wine, beer, juice, pop*, or mixed drinks that are all vegan. But if you want to really step it up, try one of these recipes, or make them later at home.

Mulled wine is really easy to make and it makes your home smell delicious while it’s simmering and mulling. If you have some whole spices and citrus fruit hanging around, put a batch on the stovetop. Here are a few different versions.

Is it too early for this White Russian/hot chocolate combo? You could swap out the candy cane for a cinnamon stick to grasp hold of that last bit of autumnal flair.

If you did Thanksgiving right, you probably have leftovers! Sure, you can eat them on a plate or in a sandwich, but what about in a waffle, pie, or (pizza) pie?

Give your Thanksgiving leftovers a proper sendoff by baking them into a pizza! You can make your own pizza dough or use a pre-made dough to get those leftovers in pizza form at lightning speed.

This glorious idea comes from hot for food. Leftover mashed potatoes are cooked in a waffle iron and topped with vegan turkey, gravy, and cranberry sauce. My waffle iron is generally underutilized, and I’m all about waffles for dinner!

Photo: Courtesy of hot for food

The Veg Life brings us Thanksgiving Leftovers Shepherd’s Pie, which also puts those leftover mashed potatoes to good use. The pie crust is filled with veggies, gravy, and an assortment of Thanksgiving leftovers, then the pie is topped with mashed potatoes.

I’m going to stop here because adding more recipes will defeat the purpose of putting together a last-minute meal. I hope this helped with your meal plan, or directed you to somewhere that did. Enjoy your meal, whether you’re celebrating Thanksgiving or not, traveling, or staying at home!

This post was originally published in November 2015 and has been updated for 2020. 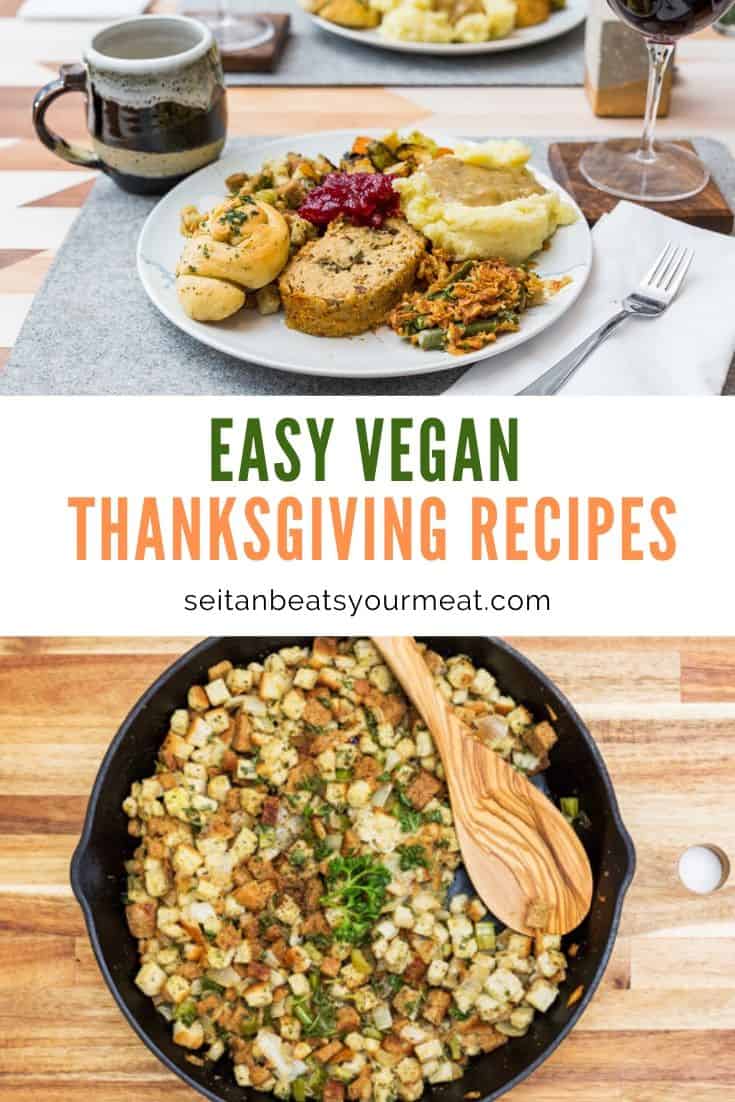 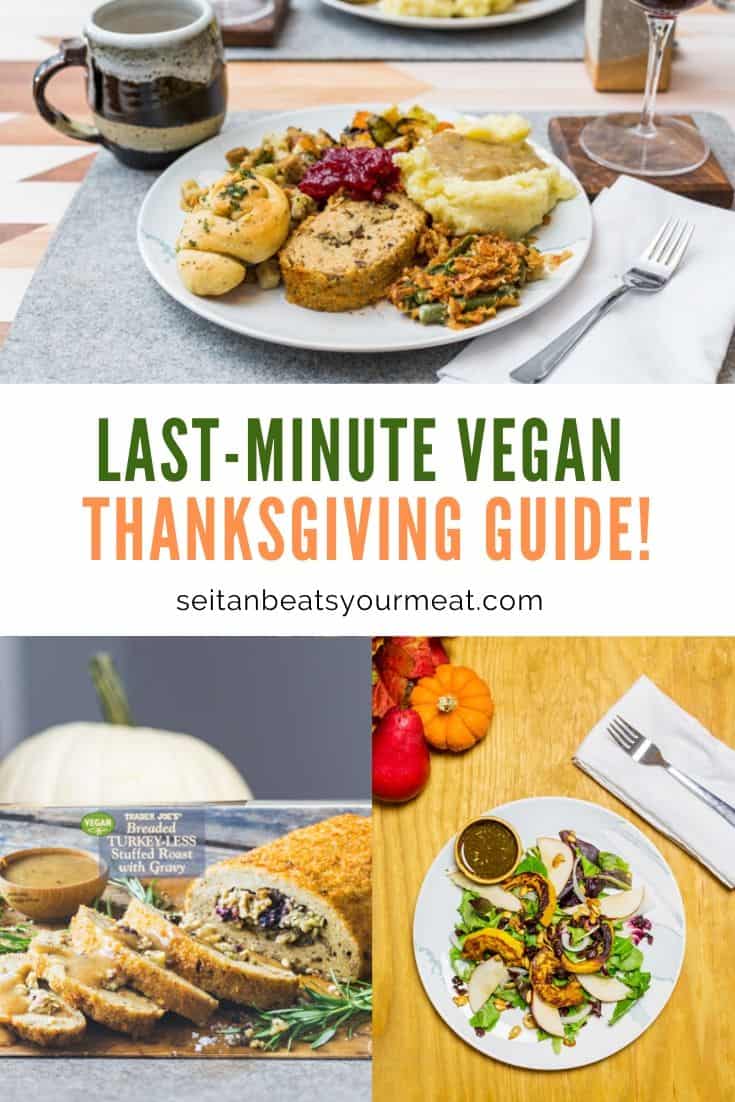 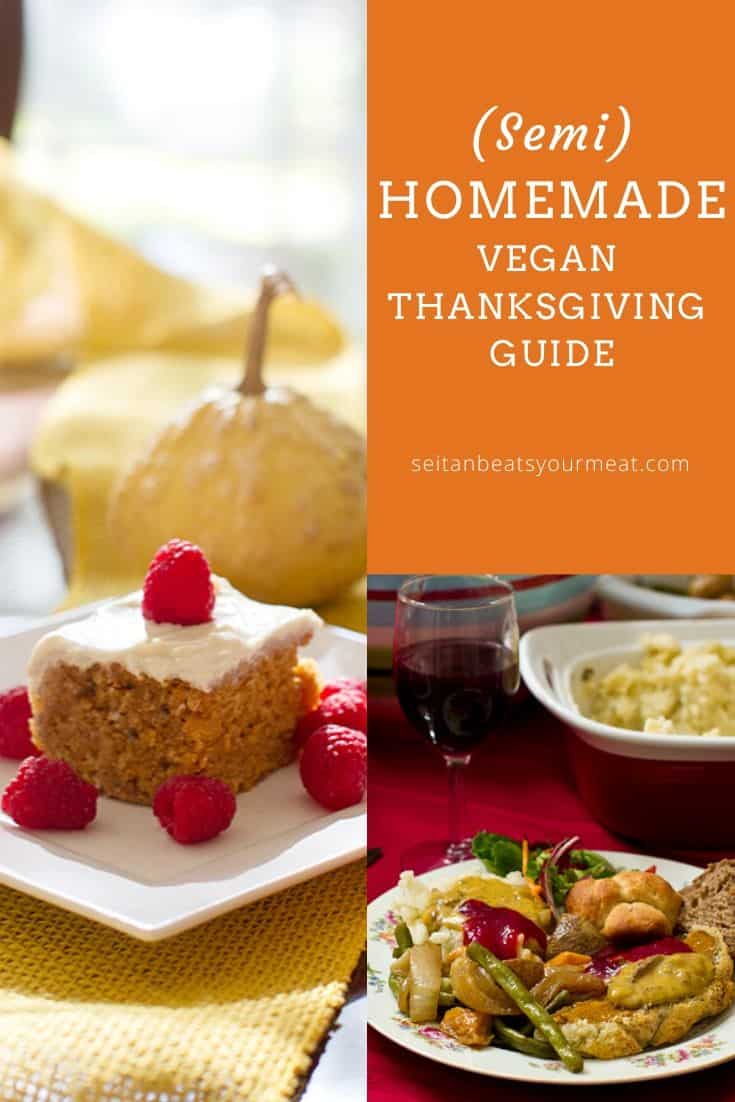 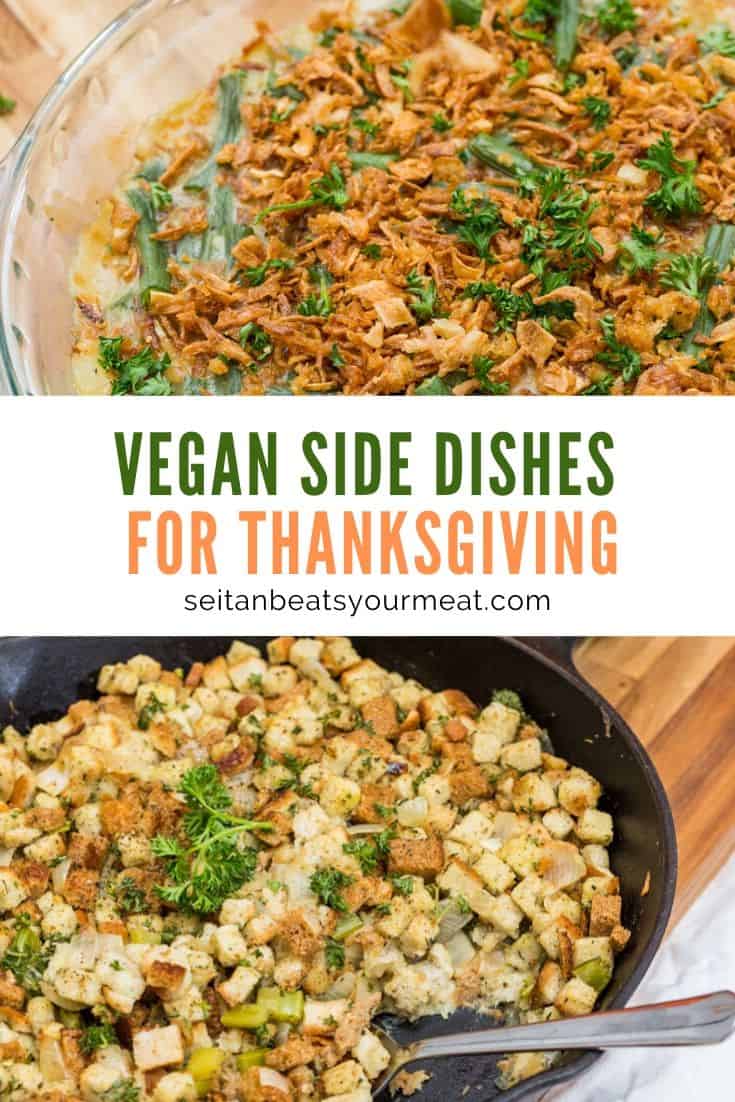 15shares
We use cookies to ensure that we give you the best experience on our website. If you continue to use this site we will assume that you are happy with it.OKRead more