This vegan French onion soup gets its flavor from the tender caramelized onions, fresh thyme, and umami broth. The secret is caramelizing the onions for as long as possible, at least an hour. Don't let that scare you off—pour a glass of wine and make an evening of it while the onions make your kitchen smell divine!

I can't remember if I've ever eaten French onion soup before I was vegan, but I had an amazing vegan version at Delice & Sarrasin, an all-vegan French restaurant in New York City, a few years ago. If you're ever traveling to NYC, I highly recommend going there for a nice dinner or date night because the entire meal and experience was fantastic.

French onion soup has very few ingredients, so each of the components play somewhat of a leading role in each bite of the soup. That means making a substitution or leaving out an ingredient will drastically change the flavor of the soup, so make sure you can find all of the ingredients before making it.

The broth in this soup also contributes a good portion of the flavor, so it's worth it to track down vegan beef bouillon or broth. Mushroom broth has a similar flavor profile with lots of umami, so you could use that since it's easy to find at most grocery stores, but it might lack that extra flavor that tastes "beefy".

If you'd like to hold out for vegan beef broth, here are some kinds you can find in stores (usually Whole Foods has at least one) or online. You can use them for any kind of soup, and they're also great to have on hand as a marinade base for vegan "beef" recipes", and stir fry sauce.

One of the things that makes French onion soup what it is and elevates it from a bowl of caramelized onions in broth to the soup we know and love is baking the bowls of soup with cheese and crusty bread. It's a big piece of cheese toast in the soup—what could be better? If you switch on the broiler, the edges of the bread get browned and toasty, and the cheese will melt and turn golden.

Make sure to use oven-safe bowls like these ramekins. If you don't want to bake or broil the soup, you can skip this step and just toast the cheesy bread in a toaster oven and add it to the soup.

What cheese is used in French onion soup?

Traditionally, Gruyère cheese is used, and although vegan cheese has come a long long way from nutritional yeast sauce, you can't just go to the store and get a vegan version of any kind of specialty cheese. One way to get Gruyère is to make it yourself using a recipe like the one in the Artisan Vegan Cheese cookbook by Miyoko Schinner. If you've dipped your toes into cheesemaking (hopefully not literally), the Gruyère is one of the easier types of cheese to make and doesn't require aging. I've tried a few recipes from the book, and posted reviews here if you're interested in cheesemaking.

Don't feel obligated to make or track down Gruyère—use any type of cheese you want! I used homemade mozzarella from the Artisan Vegan Cheese cookbook, which is very similar to the Miyoko's Mozzarella available in stores. But use whichever cheese you like—Miyoko's, Chao, Violife, Follow Your Heart, or even Daiya shreds if that's what's available in stores near you.

How to round out your vegan French meal

This soup makes the perfect starter to a French meal. Serve with some extra bread and cheese, a glass of white wine, and make some savory or sweet crepes! 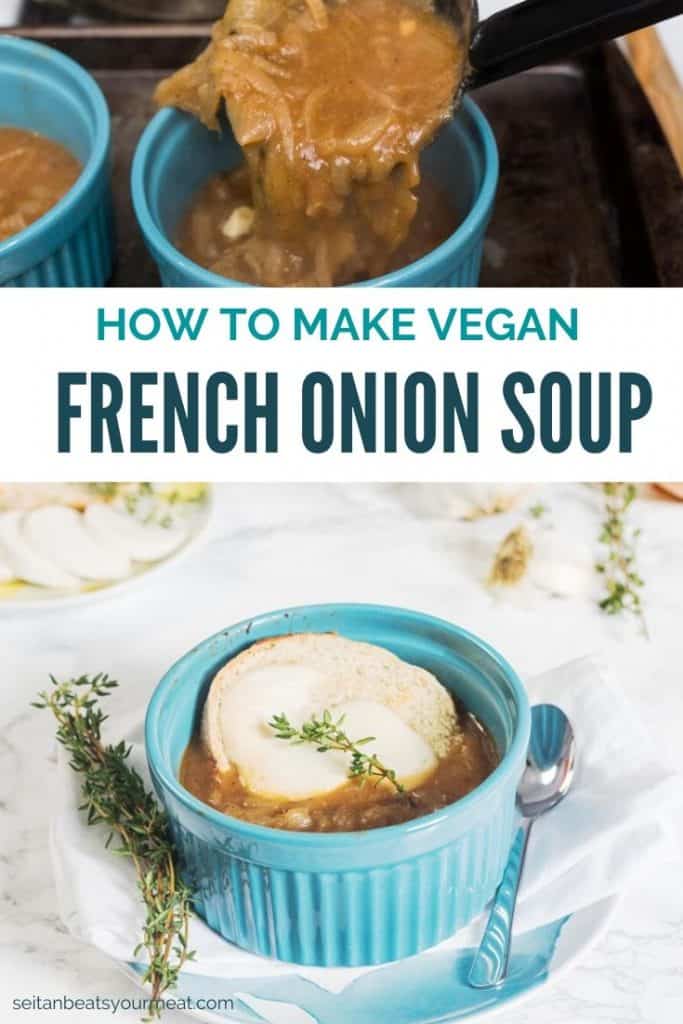