I took a solo trip to Puerto Rico earlier this year, and spent 8 days in and around San Juan. I mostly explored on foot, spending the week swimming, finding vegan food, and seeing some historical sights. Read on for things to do in Old San Juan, and the Save a Gato cats that live there!

Note: this is the second part of a two-part post! Find the first post here about El Yunque rainforest and staying in San Juan.

After a day trip to El Yunque, and kayaking at the bioluminescent bay, I spent the majority of day 4 in Old San Juan. It was a Saturday, so I made plans to check out the Mercado Agrícola Natural in the courtyard of El Museo de San Juan.

Lunch at the market was the national dish of Puerto Rico, arroz con gandules, or rice with pigeon peas. The vendor assured me that all of her food is vegetarian, since Puerto Rican cuisine uses ALL THE PORK. I also got a passionfruit juice to go with the rice.

It suddenly started pouring, as it does on tropical islands, so I waited it out with a coconut.

Waiting for the rain to stop ?

It was raining on and off throughout the day, but that didn't stop people from hanging out near El Morro and flying kites all day!

A couple days earlier, I heard people talking about a place near a wall where cats hang out. I did my own investigation, and learned that there's a great T-N-R organization called Save A Gato that cares for a colony of cats in Old San Juan! There wasn't an exact location for the cats since cats can't be contained, so I just started walking toward the "Save A Gato" pin in Google Maps. On the way, I found this cat hanging by a playground. Also, more cats!

Since it took me awhile to figure out where to go, here's a handy map for cat finding if you find yourself in Old San Juan. I started near "Patio del Morro Castle" at the top and started walking toward the "Save A Gato Foundation" pin. The majority of the cats live along El Paseo del Morro, which you can only get to through Puerta de San Juan (or through the exit at El Morro) I'd recommend starting there! Or take my scenic route.

Along my scenic route, I found a SUPER friendly cat, who decided to plop down and sleep next to me, then demanded pets.

This ? walked over, plopped down, and fell asleep next to me!!! @saveagato

After hanging out with that little guy for a while, I decided to continue to El Paseo del Morro, which is accessed through Puerta de San Juan. The cats like to sleep under the bushes during the day, but you'll find them hanging out on the rocks by the water, or getting food and water set up in the Save A Gato boxes. Sunset is a great time to do this walk because it's not as hot out, and there's less direct sunlight, so the cats will be out and about in the evening.

After my Cat Walk, I decided to find a piña colada because it's The Thing to Do, and what better place than the alleged birthplace of the drink, Barrachina? They have slushie machines constantly running, ready to dispense pineapple coconut goodness. They'll ask you if you want rum added, and you'll say, "of course." Barrachina uses Ron del Barralito dos estrellas rum for their piña coladas. I'd recommend grabbing a bottle of the tres estrellas (three stars...you'll know which is which from the number of stars on the label) from the duty free store at the airport. It's delicious, and very difficult to find in the states!

Barrachina also has a couple of vegan options clearly marked on the menu. I ordered the Vegetarian Mofongo, which took care of dinner for the night.

After walking all day, I stopped at Barrachina, the birthplace of the piña colada. They had a small vegan menu which was priced less steeply than most places nearby so I got the vegetarian mofongo for dinner. ?? #vegan #oldsanjuan #sanjuan #puertorico #piñacolada #mofongo

After that, I assessed the whole bean coffee options to take home, and filled my bag with some of the brands the employees recommended. Then I'm pretty sure I gave money to a cult while walking down the street, so I decided it was time to go home for the night.

After a morning spent at the beach, I decided to further explore the Wicker Park of San Juan on Calle Loíza. I found the biggest Little Free Library I've ever seen.

Continuing my plan to try as many different coffee shops as I could, I stopped in Café con Cé and ordered a soy latte.

As I was leaving the coffee shop, a couple approached me and asked for directions to a restaurant. It turned out to be El Punto Vegano, which I'd visited at the beginning of the week. When we started chatting, we found out that we were, coincidentally, all from Chicago, and vegan! They were incredibly nice people, and we ended up having dinner together and exchanging contact info (hi Bonnie and Keith!)

El Punto turned out to be closed that day, so we dined at a different vegan-friendly spot in the area, Ocean Park Café. I ordered the Avocado Curried Veg, which was half of a giant avocado filled with grilled vegetables coated in a coconut curry sauce, which I'd highly recommend! Entrees at Ocean Park Café come with generous portions, a side salad, and a side of your choice (I got rice and beans.) They also have a menu for dogs if you bring your pup, which is insanely adorable.

After eating a Puerto Rican avocado at Ocean Park Café, I wanted another for the condo, so I picked one up from the grocery store for $1.55(!!)

After 4 ½ days in San Juan, I'd only spent time in Condado, Old San Juan, and Ocean Park, so I decided to walk a little further south in Santurce toward La Plaza del Mercado to assess the produce situation (did you know that you can bring some fruits and vegetables back into the US, including those avocados?)

La Plaza del Mercado is not the largest market in the city, but they have the essentials—fresh fruit and vegetables, fresh fruit juice and coconut water, and food and beer stands if you're hanging out at La Placita on a Friday or Saturday night.

Also in that area is another great coffee shop, Hacienda San Pedro. They sell their coffee beans in bags with burlap sleeves, which can be found in tourist shops around Old San Juan. But I'd recommend getting it from the source here at their roastery in Santurce.

Day 6 turned into Sick Day by the afternoon as I started coming down with a cold. I mashed up half of that giant avocado from the previous day, made some hot tea and soup, and went in for the night early.

Something about resting, fresh food, and spending time in saltwater knocked out that cold overnight. Besides losing my voice for the rest of the trip, I felt just fine and could walk around all day again. Since I'd be leaving the following afternoon, I wanted to take one last trip to Old San Juan. I made plans to walk along El Paseo del Morro later in the day to see the Save A Gato cats around sunset. Visiting the Save A Gato cats is one of my favorite things to do in Old San Juan!

I had to try another coffee shop that came highly recommended by the internet, Cafe Cola'o. It's located near the cruise ship ports in Old San Juan.

Golden Hour near the entrance to El Paseo del Morro.

I did the El Paseo del Morro walk again, and didn't realize the gate to the exit locked after 6pm. So I did the walk twice, back to the entrance at Puerta De San Juan!

Before heading home, I got dinner at Suka, which is an all-vegan cafe and juice bar on Avenida Ashford in Condado.

I had to check out of my Airbnb by 10 or 11am, so I made the most of my last morning by one more trip to the ocean, and the pool at the condo!

On my way to the airport, I visited El Punto Vegano again (noticing a theme?) I ordered Chinese rice, seitan, red beans and carrots, and a mango smoothie. As it was lunch hour, locals and those who work in the area were also in for lunch. Upon seeing my suitcase, quite a few people stopped over, then asked if I'd enjoyed my time in Puerto Rico. Someone even sat down and gave me recommendations for next time, and treated me to a guava cheesecake! This was not unlike other experiences I'd had throughout the week. People stopped to talk, and never acted like I was taking up their time.

Bonus: My flight arrived in Terminal 3 of O'Hare, so I got to walk down the rainbow hallway.

San Juan turned out to be such a great solo travel destination between the easy travel logistics, all of the activities available for any kind of travel style, and friendly locals and travelers. In addition, the slower pace of the city, and the genuine friendliness everywhere I went made traveling solo that much easier, and my trip that much better.

So, when are you taking a solo trip to Puerto Rico? 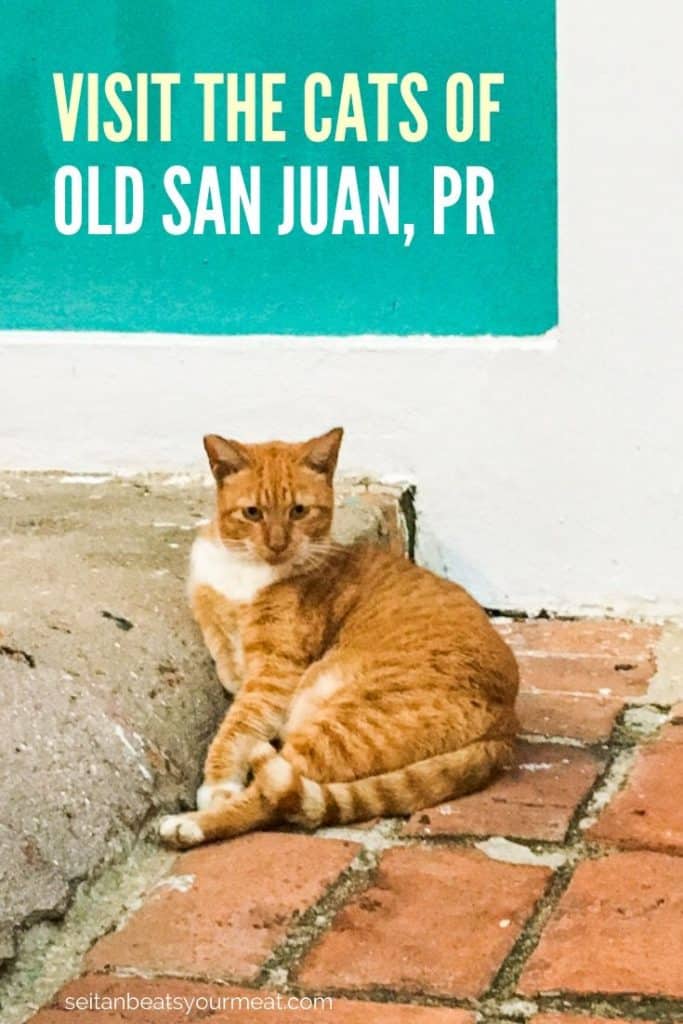 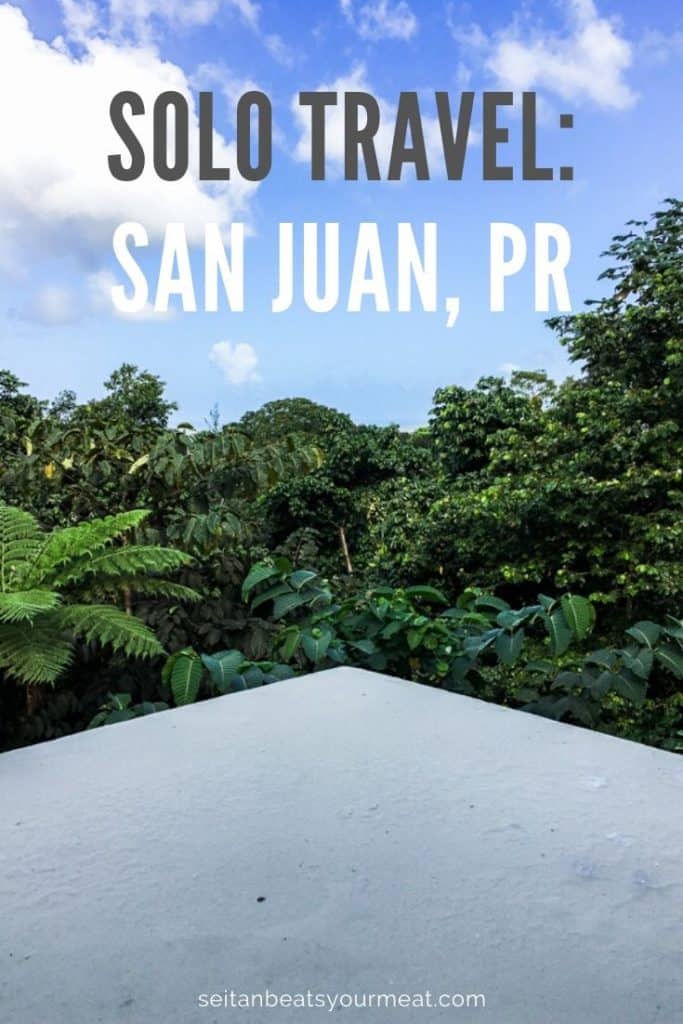 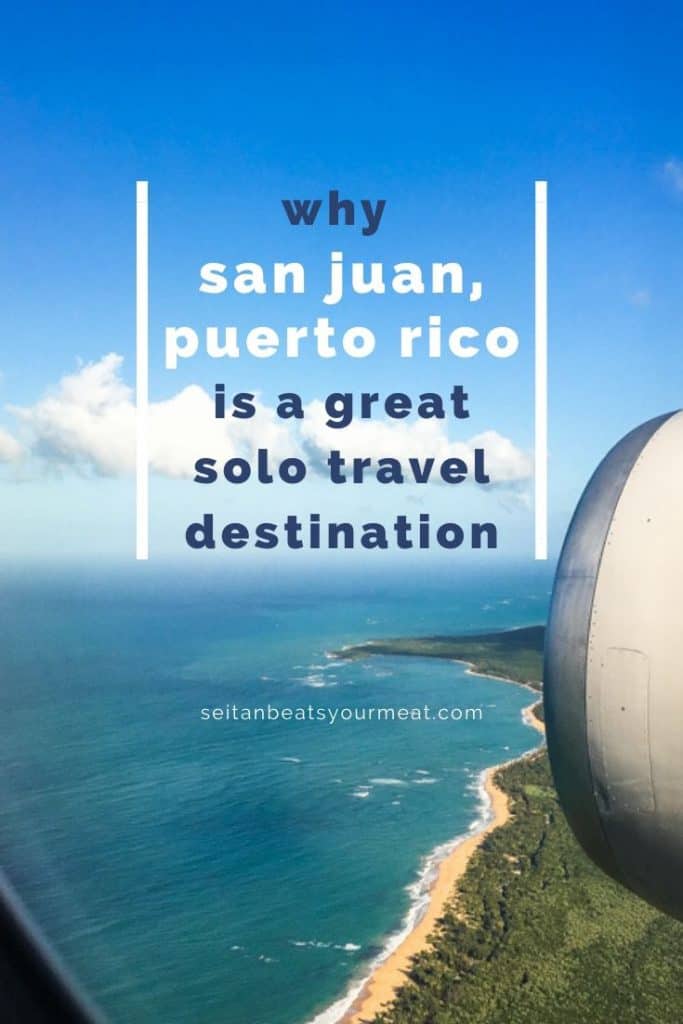