I tried my hand at solo travel in February when I took a trip to San Juan, Puerto Rico. I spent 8 days exploring the island, finding vegan food, petting cats, and enjoying the warm weather! Since we have 6+ months of winter in Chicago, this is about the time of year that it really starts wearing me down, especially when combined with the slowest time of year for my work. There are so many ways to make this an affordable getaway (starting with keeping your eyes peeled for a flight deal.) and Puerto Rico has something for everyone, whether you want to hang out on the beach all day, go hiking, or spend your days immersed in history.

Why I Chose Puerto Rico as a Solo Travel Destination

I was stalking Google Flights everyday looking for ideas, but was continually put off by the idea of spring break-style resort towns. Finally, San Juan came up one day, and I was immediately on board when I realized it was a perfect combination of history, culture, nature, and ocean, all while being generally safe for solo female travelers.

Getting to Puerto Rico as a US citizen is pretty simple. Since there's no customs line and a passport is unnecessary, it's just like any other 4 hour domestic flight. All major US phone carriers work on the island, and the currency is the US Dollar.

Where I Stayed in San Juan

After a less-than-fruitful hotel search (turns out that booking a month in advance during San Juan's busy season is not enough!) I started looking at Airbnb and found some nice options in Condado, which is a central location right near several beaches. While I had an Airbnb account, this was the first time I actually booked one. Since this was solo travel, I made sure to choose one from an established account with lots of reviews, and avoid anything that sounded too good to be true. I booked a small private studio condo with a balcony, pool, and full kitchen, located a 4 minute walk to the beach, for $112/night after taxes and fees. You could definitely stay at a hostel for cheaper if that's more your speed, but if there are marginally more expensive options with fewer cleanliness and privacy variables, I'mma take them.

I didn't sign up with Airbnb using a discount code, but you should! If you use my link, you'll get $40, and I'll get $20 when you book your first trip.

How I Got Around San Juan

The public transit system is incredibly unreliable in San Juan, so everything I read prior to the my trip recommended renting a car. Although I have a driver's license, I don't own a car and don't feel comfortable driving regularly in my daily life, so I certainly wasn't up for driving around an unfamiliar city in a different country. If you drive, it would be a good idea to rent a car to be able to travel outside the San Juan metro area. Otherwise, a combination of walking, taking the bus (when it actually arrived), and having the option of calling an Uber was plenty of transportation options for me.

English and Spanish are both official languages of Puerto Rico, but Spanish is still the more official official language. Since most people are bilingual—especially in the city, and especially younger people—if you run into any trouble while traveling, there should always be someone nearby who speaks the same language as you.

While I am not fluent, and conversational Spanish is not my strong suit, I tried to speak as much as possible, and not automatically assume any person spoke English. People will be appreciative that you tried, even if the conversation switches to English.

Traditional Puerto Rican cuisine involves a liberal use of pork (some Spanish words to look out for are cerdo, jamón, tocino, puerco, and chicharrón) so when in doubt, I asked or opted for a different dish. Aside from one arranged group trip, my trip was 100% solo travel during the entire week, so I could choose vegan or vegan-friendly restaurants. This was incredibly easy in Old San Juan, and the other high-traffic tourist areas.

While Puerto Rico produces several food crops on its 3515 square feet, the majority of food on the island is imported. This makes groceries and dining out cost more, and if you're eating at restaurants in the touristy areas of San Juan, be prepared to run up a tab.

I saved some cash by keeping my dinner leftovers for lunch the next day, and eating at markets and cafe-style spots. Since I was staying near the FreshMart Condado, a small Whole Foods-type grocery store, I got a box of cereal to eat throughout the week for breakfast, as well as smoothies and snacks throughout the week.

My flight from O'Hare to San Juan arrived in the early afternoon, so I still had a good amount of time on my first day. I thought I'd try the bus to get to my Airbnb, which had me following the GPS along the side of the airport past multiple lines of cabs in 80°F heat while still in my winter clothes. I quickly gave up and took a cab.

After dropping off my luggage at the condo, I walked over to FreshMart and ate something from the deli called a "vegan vegetable sandwich" which was a veggie burger mashed up with some kind of spread, and lettuce. Nothing spectacular, but it was food!

My walk around the neighborhood brought me to Condado beach:

There are several hotels and yoga studios that offer yoga on the beach, and I had planned to take a class at Parque del Indio with Melba of RASA Healing. Melba offers by donation classes twice a week at this location, and she is a warm, welcoming instructor, so I'd recommend going, especially after a long flight!

I was tired, hungry, and still unfamiliar with the city, and for dinner I wanted to try something close by without too much fuss, so a Mediterranean restaurant seemed like a safe bet. I found out that they didn't serve any of their falafel sandwiches or veggie wraps for dinner, so I went with the falafel appetizer and a small lentil soup, which set me back...$18. Because of the tiredhungry circumstances, I can laugh about this.

I give my activities of the first day a 10/10, and the food a 4/10, knowing that there would be much better foodventures ahead!

On my first full day in San Juan, I spent the morning swimming, at the ocean and the pool. This was incredible because I wasn't in Chicago in February anymore!

For lunch, I set out to find one of the only vegan restaurants in San Juan, El Punto Vegano. The lunch menu changes each day because the food is served cafeteria-style. If you're looking for authentic, homestyle Puerto Rican food made vegan, this is the place to be. I got a plate with potatoes, rice, chickpeas, plantains, and a seitan veggie patty hiding under the plantains. Including an agua de coco, this meal was about $11, and one of the more affordable veg options in town.

UPDATE 12/2019: El Punto Vegano moved to a new location in Cataño, which is a short ferry ride away from Old San Juan.

After lunch, I walked back to the condo and decided to spend the rest of the day in Old San Juan. I miraculously caught a bus within 10 minutes of getting to the stop, and was on my way to my first stop in OSJ, Cuatro Sombras coffee shop. The name continually came up as one of the best coffee roasters in San Juan, and definitely lived up to the hype.

I spent the rest of the evening wandering around the streets of Old San Juan, admiring the colorful architecture. All of these photos (and all of the photos in this post, except for a few from El Yunque) are iPhone, and I found that with enough light, the image quality was much better than the photos from the older model DSLR I lugged around for half of the trip. Go figure!

Dinner was at Cafe Berlin, which has a full vegan menu for lunch and dinner, and vegan options for brunch and dessert. This is the Tofu Rican Wrap:

After dinner, I was in for the night (Uber was the best way to get back at that point) because Day 3 had a pretty early start.

El Yunque National Forest is the only tropical rainforest in the US national forest system, and it's 45 minutes away from San Juan! Since my transportation options were limited without a car, I decided to book an all-day tour to El Yunque. This trip included a kayaking trip to the bioluminescent bay in Fajardo. The company I used was Kayaking Puerto Rico, but there are several groups offering similar experiences. While it is free to visit El Yunque, the cost of the trip included roundtrip transportation, and I got the bonus of going on the kayaking trip.

I didn't have any expectations for how the tour would be structured, and the way they did it was great. At each sight, we were free to wander off, as long as we were back at certain times throughout the day. It was great to be able to go at my own pace, and stop and take photos.

The final destination on this leg of the hike was La Mina Falls:

You can see more photos from El Yunque over on my photography blog.

Between El Yunque and the kayaking trip, we stopped in Luquillo for lunch. I packed snacks for the day just in case there wouldn't be vegan options. Luckily, they were able to make an amazing veggie mofongo!

I don't have photos from the bioluminescent bay for a few reasons. It had to be pitch black during the kayak trip, and unfortunately, the bay was not all that luminescent that day because the moon was so bright. The tour guides were great, and brought a tarp to cover the boats so we could see the water sparkle. It did not have a blue glow on this particular night, but it was still incredibly cool to go kayaking through the bay. You can't control nature!

During the remainder of my trip, I explored San Juan on foot, found more restaurants, and learned there's a unofficial cat sanctuary, so be prepared for about 100 cat photos.

If you've been to San Juan, what were some of your most memorable experiences? What about the west and central parts of the island (I'll definitely need suggestions for next time!)? 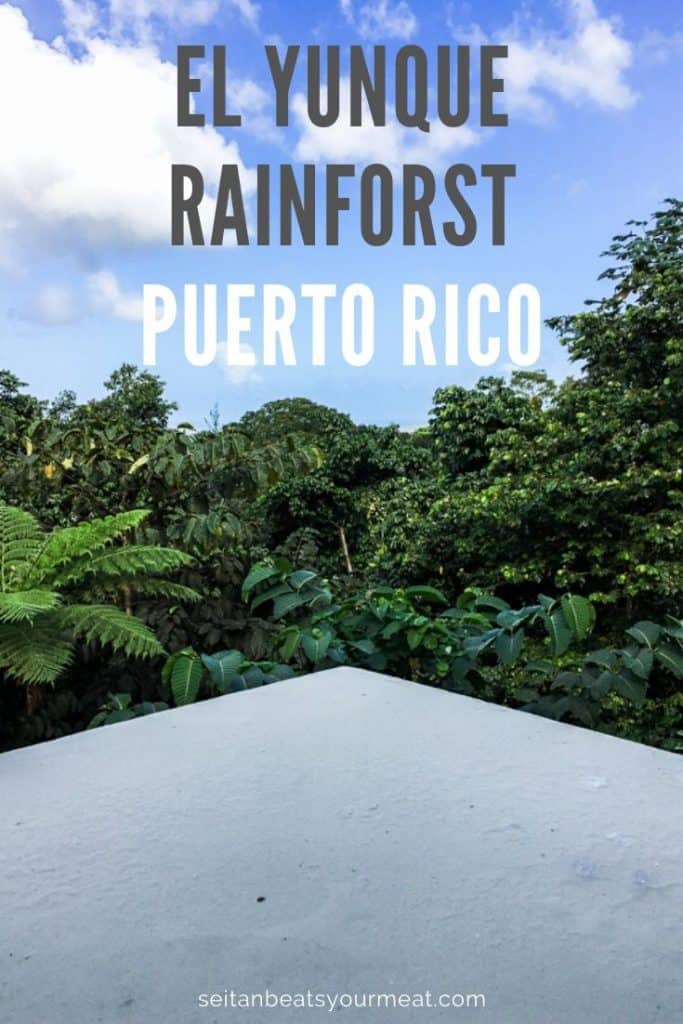 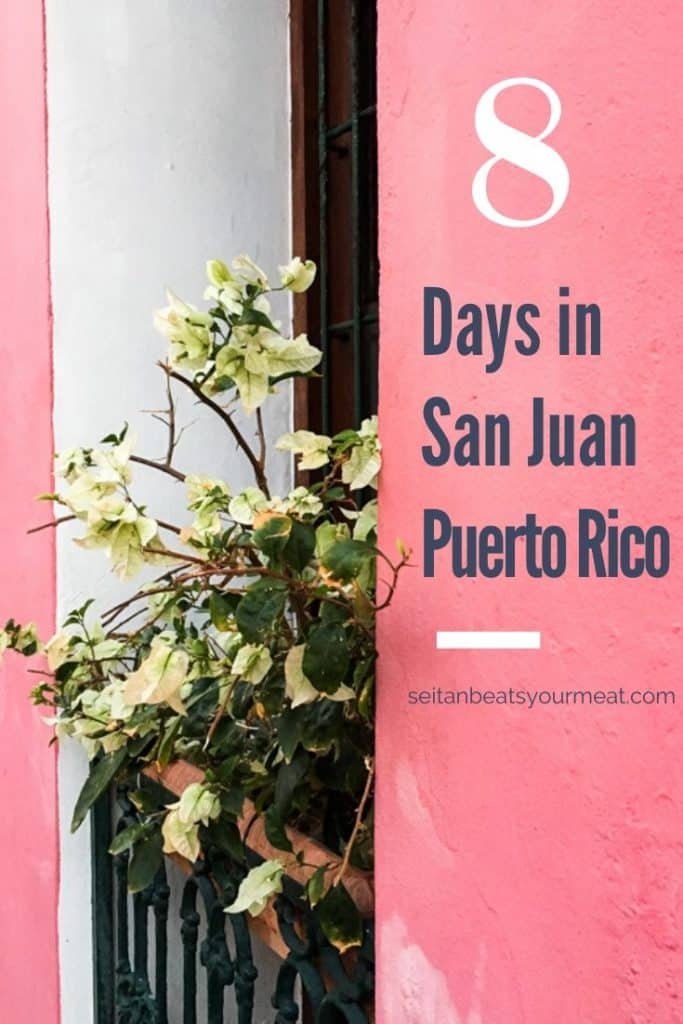 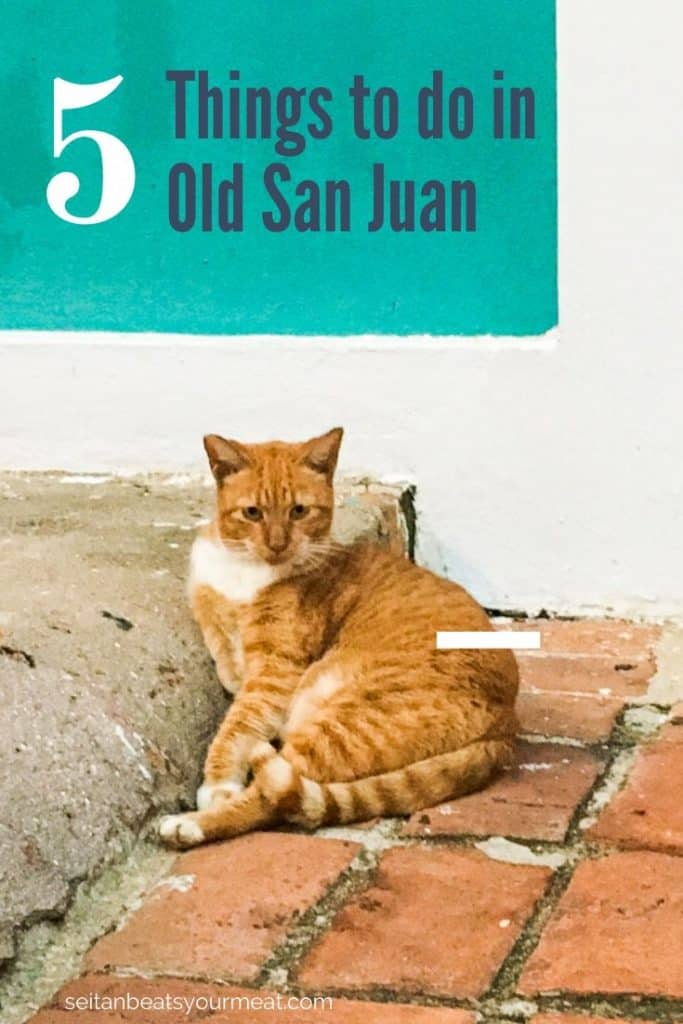