Ever wondered how to make seitan at home? It's easier than you think! This chicken seitan can be marinated and used in stir fries, eaten in a sandwich, or used in any recipe that calls for it.

Hi, my name's Kelly and I have a blog called Seitan Beats Your Meat, but I've never posted a seitan recipe. For shame. That is about to change.

Seitan sometimes gets a bad rap because making it is one of those things that can go wrong in so many ways. It can be spongy, bready, gummy, or even squeaky when you bite into it. It can be flavorless, or dry and crumbly.

But when it's right, it's right, and you have an incredibly versatile vegan protein. I'm going to tell you the best way to make, season, and cook seitan, and where to steer clear.

Seitan is a wheat-based protein-rich food made from...the infamous gluten. It can be sliced, diced, or shredded and used in any recipe in place of meat, and is usually the main ingredient in vegan Thanksgiving roasts, and vegan "meat" dishes at restaurants.

Although seitan is often stereotyped as a weird vegan food, it has origins in China and Japan, used over 1000 years ago in vegetarian Buddhist cuisine. Over the centuries, it was brought to other parts of the world and became a common meat alternative in vegan and vegetarian cooking.

The traditional way of making seitan involves washing the starch out of flour until only the gluten remains. Nowadays, you can skip this step and use vital wheat gluten, which is wildly easier. The most common brand of vital wheat gluten in the US is Bob's Red Mill, which you can find online and at most well-stocked grocery stores.

There are merits to both homemade and store bought seitan. You can make your own in any shape or size you please, and it's affordable to make in large quantities. But store bought brands make it simple to grab and go.

Seitan will come out perfectly each time if you know which cooking methods to use, and which to avoid.

This is my favorite way to make seitan, and the method used in this recipe. I learned this method from cookbook author Julie Hasson in her recipe for vegan Italian sausage. It retains the moisture and yields a dense chewy seitan each time. No squeaky seitan in sight.

Baking is my second favorite way to make seitan. Baking the seitan dough gives it a chewy and crispy exterior, so I only like to bake my seitan if I'm breaking it into small pieces before baking for recipes like seitan tenders or "wings".

I don't do it, and don't necessarily recommend it. Ever had your seitan turn out looking like brains? Boiled seitan is so finicky, and usually the reason for spongy, squeaky seitan.

I have not tried air frying seitan, but Kathy at the Healthy Slow Cooking blog has a recipe for Air Fryer Seitan Riblets and they look great!

Since deep frying isn't something that usually happens in home kitchens, I don't focus on this method, but it will definitely work.

You'll start by placing all of your dry ingredients in a stand mixer equipped with a dough hook (helpful for making seitan, and a must have if you bake a lot of bread!), or a large bowl if you'll be making it by hand. It's important to mix all of the dry ingredients together thoroughly, especially the vital wheat gluten, because the wheat gluten will become gummy when mixed with water.

Nutritional yeast and spices, along with the vegan chickenless broth, give the seitan its base flavor.

Types of broth to use

Using a vegan "chicken" broth gives this seitan a ton of flavor. The best, most economical way to get vegan chicken broth is to use a bouillon cube or base.

I like this vegan chicken base from Bulkfoods, as well as the Better Than Bouillon No Chicken Base. You could also make your own using a recipe like this one from My Plant-Based Family.

Once you add the liquid ingredients to the dry and mix completely, the seitan will peel off the side of the bowl and you'll have this glutinous ball. You want it to hold together, and be wet to the touch. If it's still a little dry or crumbly, add a bit more broth.

Divide the seitan into 4 pieces, and place each piece on a piece of foil.

Fold the foil over each piece like a present, and flatten it with your palm.

The seitan is steamed for 35 minutes or until firm, and that's it!

You can find steamer baskets for pretty cheap online, or sometimes at the grocery store. This one is $9.95.

If you don't want to buy one, you can scrunch up pieces of foil, place them in the bottom of a pot, then place the seitan packets on top. Or look around your kitchen to see if there's anything else to prop up the seitan in the pot, like a small colander or circular cooling rack. As long as the water is not touching the seitan, you can use anything.

Ways to use your seitan

One you have your seitan, you can slice it up and use in all kinds of dishes. You can use it straight out of the packet if you like the flavor as is, or marinate it first.

This is the easiest way to use it! Slice the chicken seitan into strips or bite-sized pieces and pan fry before you add veggies and sauce. Try my Takeout-Style Kung Pao Tofu with seitan in place of tofu!

You can slice the seitan into thin pieces like lunchmeat, or thick pieces like a chicken sandwich. You can even bread and pan fry it before adding to your sandwich. Or shred your seitan and mix with barbecue sauce for a pulled "pork" sandwich. Try it in a Jibarito Burger!

Add it to a soup, stew, or casserole

Chop up your seitan and add it to soup or stew, or bake it into a casserole. It would be a great addition to my 10 Minute Wonton Noodle Soup!

Any recipe that calls for chicken or other meat

Seitan is typically used as a meat alternative, so you can swap it out for the meat in any recipe and use the same marinade. Keep in mind that seitan is already cooked, so it won't need to cook as long as directed for raw meat.

Your cooked seitan will last up to a week when stored in the refrigerator. You can keep the packets of seitan in the foil and take one out for dinner throughout the week.

You can freeze seitan! Since this recipe calls for steaming the seitan in tidy little foil packets, you can freeze them right in the packet or place the packets in a freezer bag first. Then when you want to use it, take out a packet and let it defrost in the refrigerator throughout the day before using.

You could also slice the seitan into strips before freezing it so it doesn't take as long to defrost. You could take the frozen strips from your freezer and toss them directly in a stir fry, and they will defrost as they cook.

Pin it for later: 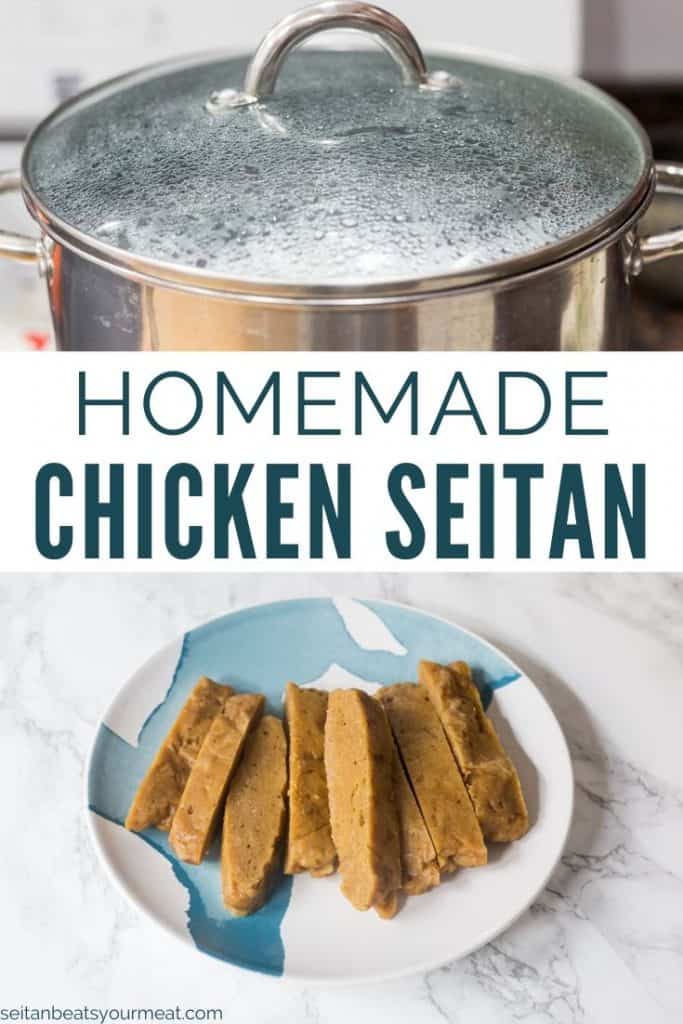 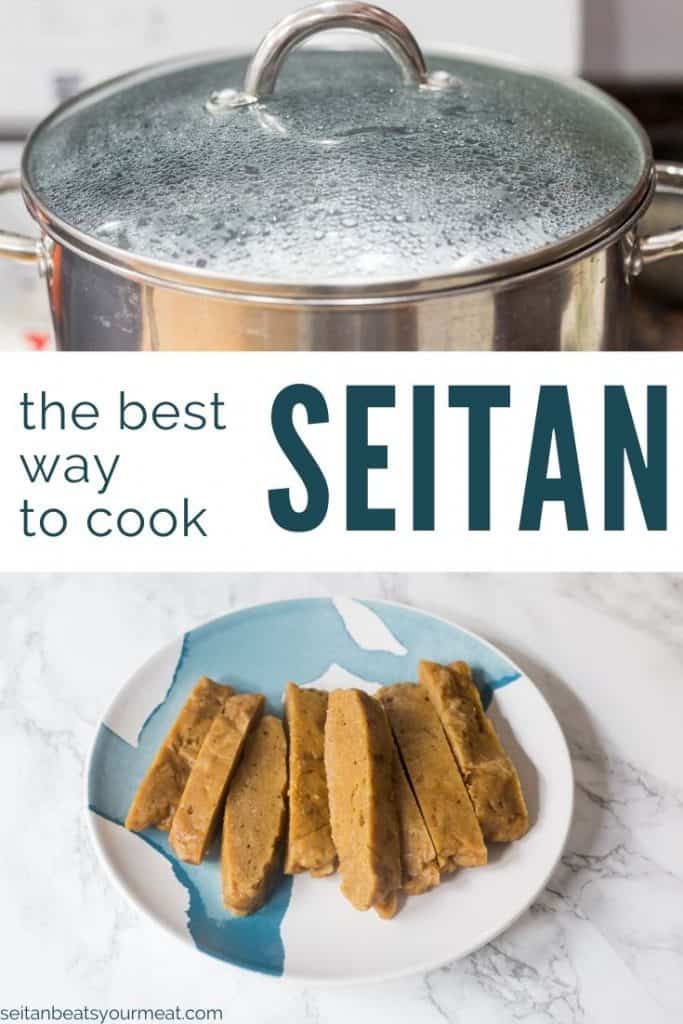 Skip to Recipe
64 shares
We use cookies to ensure that we give you the best experience on our website. If you continue to use this site we will assume that you are happy with it.OKRead more