These Greek lemon potatoes are marinated in lemon juice, olive oil, garlic, and oregano, then roasted and braised in the oven. The edges are a bit crispy, yet they have a soft texture and melt in your mouth. If you like these potatoes at restaurants, you'll love how easy they are to make at home!

When I was in college, I lived within walking distance of a Greek restaurant with vegan options, as many Greek spots do. They were also open all night long, so they were a go-to spot for late night eats back when I had the ability to stay awake past 10pm. I'd always get the veggie combo that came with falafel, hummus, kalamata olives, and pita, as well as the lemon potatoes, or ellinikos lemoni patatas.

You can get lemon potatoes at any Greek restaurant, but sometimes they're cooked in chicken or lamb stock, so they're not always vegan. I crave these potatoes often, but never thought to make them at home. Turns out it's pretty darn easy, and the combination of garlic, lemon, and oregano makes your house fill with an absolutely amazing aroma.

Greek lemon potatoes are made with a two-part cooking process that gives them a texture somewhere in between roasted and boiled. They have a "skin" that snaps when you bite into them, but have the creaminess of a boiled potato. This is achieved with a combination of roasting and braising, which is roasting a protein or vegetable submerged in a broth or marinade.

When I was researching cooking methods for the potatoes, some recipes said to roast the potatoes on a tray, then transfer them to a different pan for the braising. Or they skipped the roasting step altogether. I decided the best and easiest way to cook them was to roast and braise them in the same pan. You won't have to transfer them partway through cooking, and there's only one pan to clean.

PSA: Use a metal pan, not glass

A 9x13-inch aluminum pan is perfect for this recipe because you can spread out the potatoes on the pan for roasting, then simply pour the marinade and broth in for the rest of the cooking time.

Don't use a glass pan for this. It may shatter when you pour in the liquid due to the temperature change.

If you don't have a metal 9x13-inch pan, you can roast the potatoes on a baking sheet, let them cool a bit, then transfer them to a 9x13-inch glass dish for the braising step.

How to prepare the potatoes

Start by peeling the potatoes, and slicing them into thick wedges. Place them in a bowl or dish for marinating.

The lemon, garlic, and oregano marinade

The marinade is basically 1 part lemon juice and 1 part olive oil with some crushed oregano (use Greek oregano or fresh oregano if you have it!) and minced garlic. Make sure to mince the garlic finely so that it sticks to the potatoes.

The recipe calls for ⅓ cup olive oil, which seems like a lot, but don't be tempted to use less. The olive oil coats the potatoes when they're roasting, and then gives them an incredibly tender texture when they're braising.

Reserve the leftover marinade. You'll be mixing it with veggie broth for the braising step.

Remove the potatoes from the marinade with a slotted spoon and roast them for 25 minutes. Reserve the leftover marinade.

Since the potatoes will be coated in olive oil and will have absorbed some of the lemon juice they won't turn very golden or crispy. That's okay.

When you take the potatoes out of the oven, you'll mix the veggie broth into the marinade, pour it over the potatoes, and return them to the oven for 30 more minutes until fork tender.

You can slice some lemons to serve with the lemon potatoes.

Ta-da! Plate your finished Greek lemon potatoes, sprinkle a bit of coarse salt and oregano on top, and dig in!

Pin it for later: 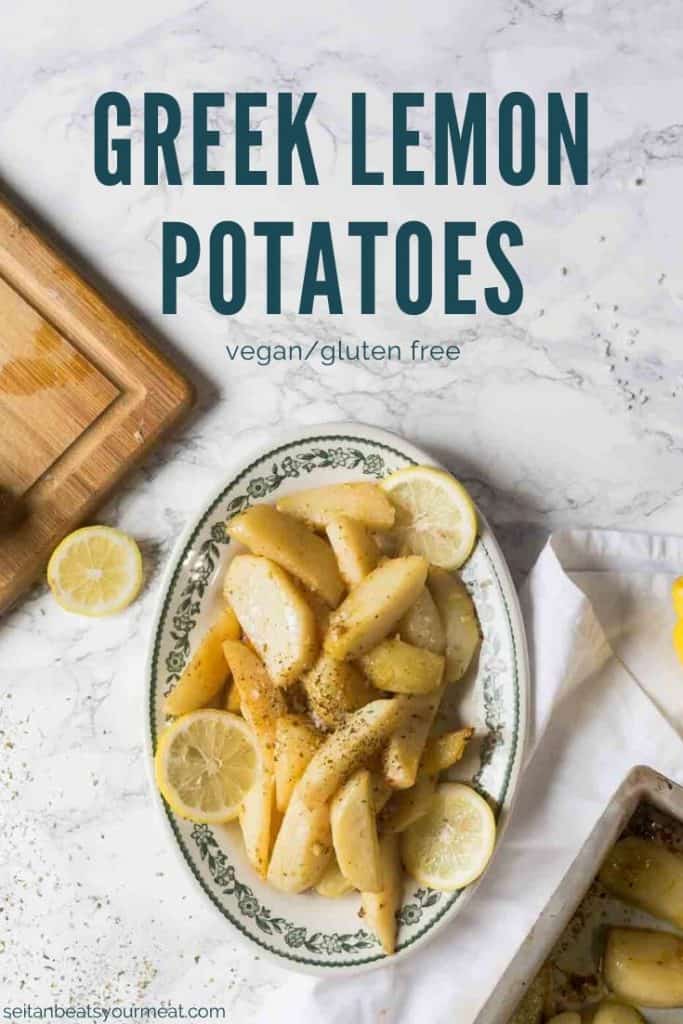 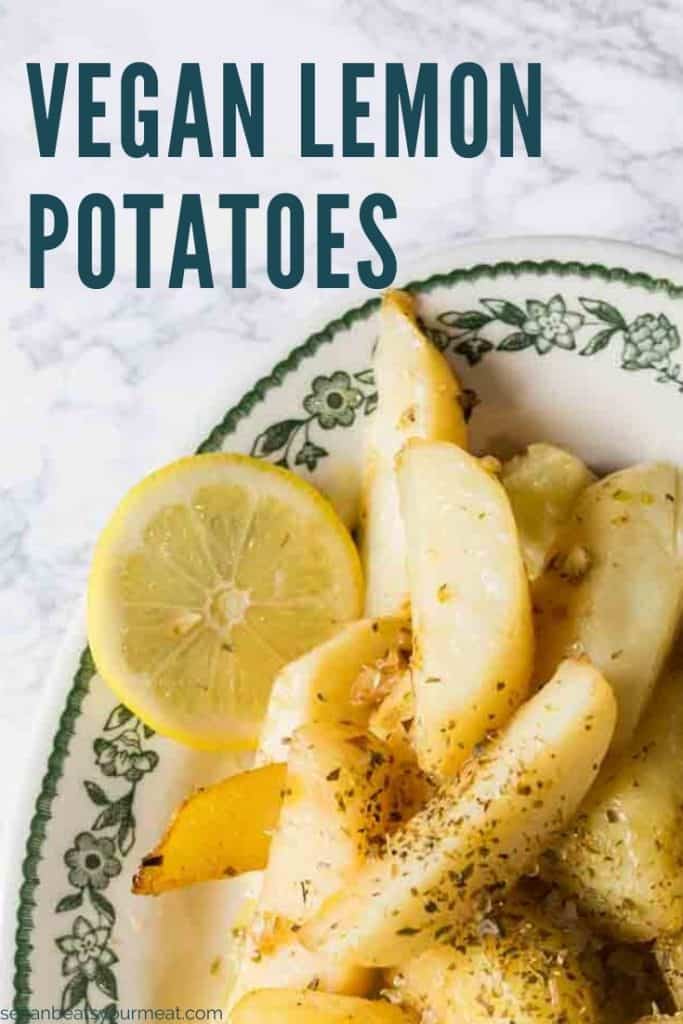 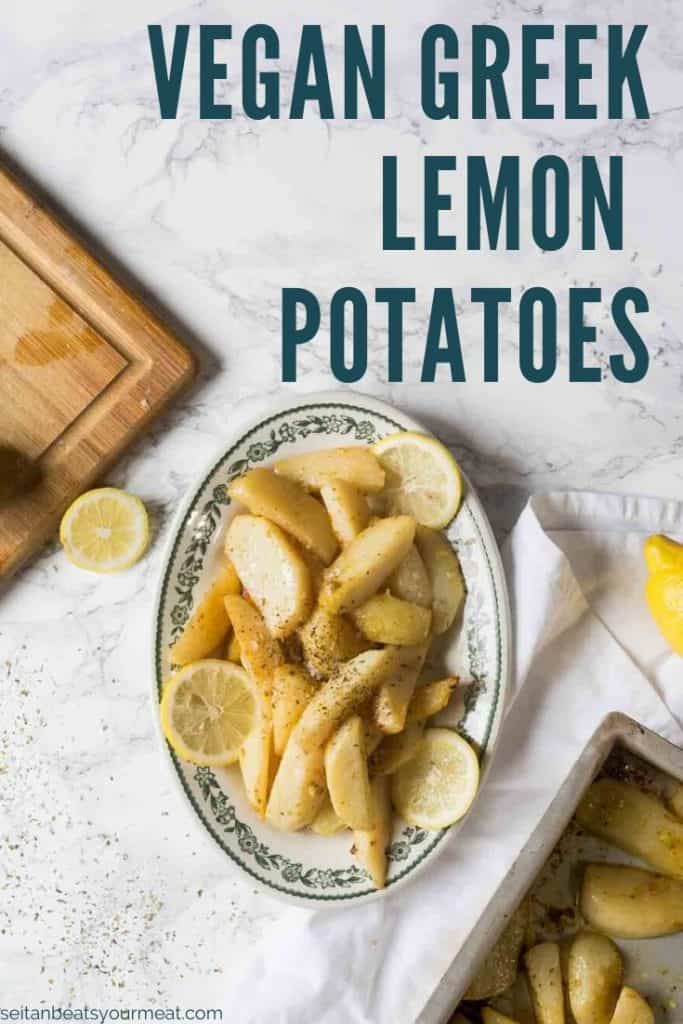 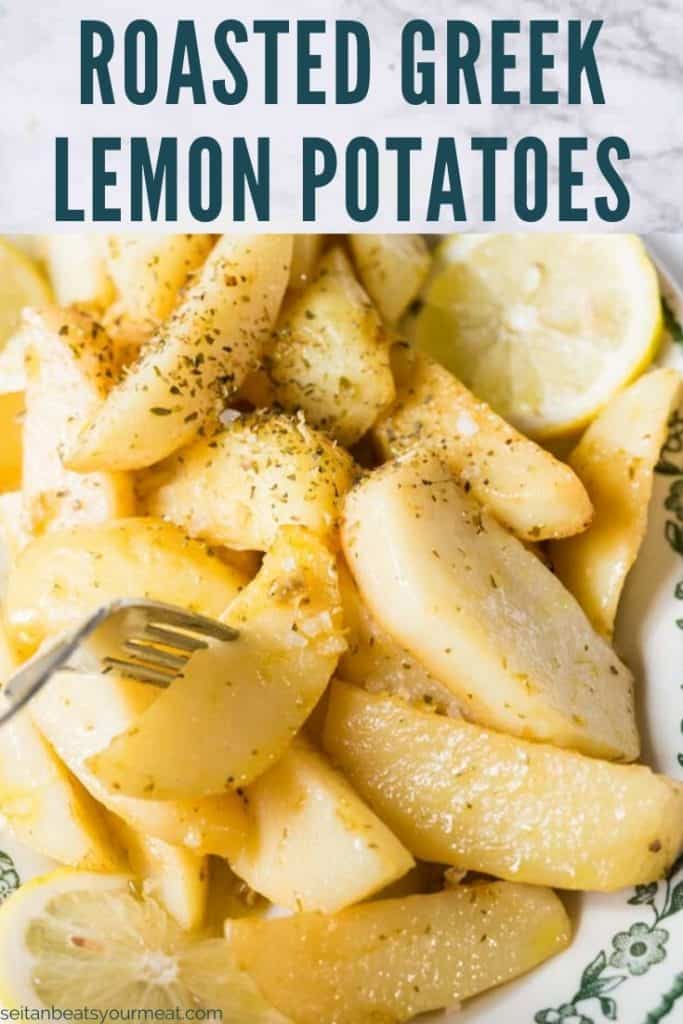 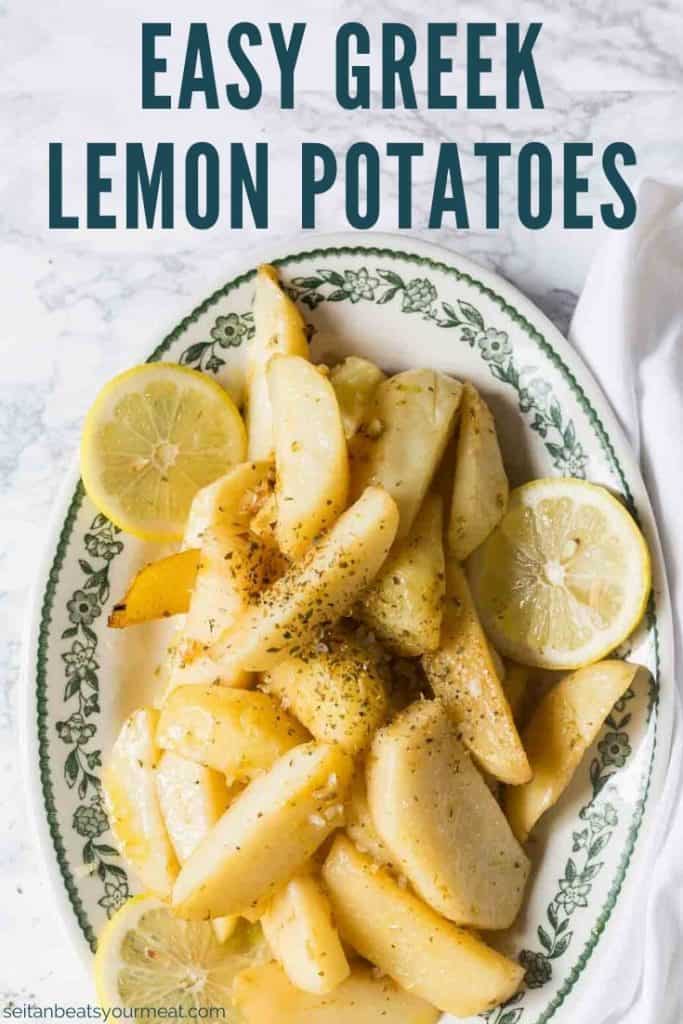