Happy Fall, Autumn Equinox, vegan PSL weather, back to school, cold weather, and most relevant here, cooking and baking weather! When it's too hot to cook, Chicago offers plenty of summer dishes, markets, and restaurant specials. While I wasn't doing much recipe creating over the summer, I did try a few new things like making cold brew coffee, cashew milk, and homemade cheeses.

Now it's time to dial that back and jump back into regular cooking/baking/blogging/staying inside during the prime food blog seasons: fall and winter. As one of my first projects, I decided to try my hand at artisan vegan cheesemaking and make cultured cashew cream cheese.

The recipe comes from the cookbook Artisan Vegan Cheese by Miyoko Schinner. Fermenting and culturing nuts to make vegan cheese has become really popular over the past few years (for good reason—the results are delicious!), but I've been a little afraid to try it myself because...mold. Many cultured cheese recipes require making rejuvelac (a liquid made by fermenting sprouted grains), or ordering special ingredients like probiotics and lactic acid. Then you have to make sure you're growing good bacteria instead of bad bacteria and worry about if you know how to tell the difference and WHAT IF YOU DON'T AND THEN POISON YOURSELF?!

Well, I was scrolling through Facebook and saw that Miyoko's Kitchen made a recipe video for an easy cultured cashew cream cheese. Turns out that the recipe called for just raw cashews and yogurt probiotics that you can get from a container of regular ol' soy or coconut yogurt. I could handle that. And if I grew some deadly mold, I grew it from a $2 container of yogurt.

How to make the cream cheese

Rather than typing up the recipe, I'll link to the recipe video from the Miyoko's Kitchen on Facebook HERE. In the video, Miyoko demonstrates the recipe step by step, and explains how the culturing process works. It's a good idea to watch it if culturing and fermenting is a first-time endeavor for you. You'll find the same recipe typed up with some additional tips and troubleshooting on Your Vegan Mom and Yup, It's Vegan!

Basically, you soak the cashews overnight, blend them well in a high-speed blender, add a little bit of yogurt, then culture the mixture in a warm place. That's it! When I took the mixture out of the (off) oven, I scooped it into cheesecloth in a strainer and moved it to the refrigerator overnight.

In the morning, it smelled EXACTLY like dairy cream cheese. Woohoo, I did it (mostly)! I stirred it up a little just in case there were air bubbles from the culturing process, and the cream cheese smell got lost a little and was more on the tangier side. I'd made the cream cheese on a 90°F day and let it culture for a little over 24 hours (Miyoko recommends 24-48 hours.) Because of the high heat and humidity, the cultured cashew cream cheese was a little tangier than it should be, so I should have moved it to the refrigerator a little earlier. Next time I'll check on it every hour as it's approaching that 24-hour mark and it will surely be perfection for bagels, cheesecake, and more! 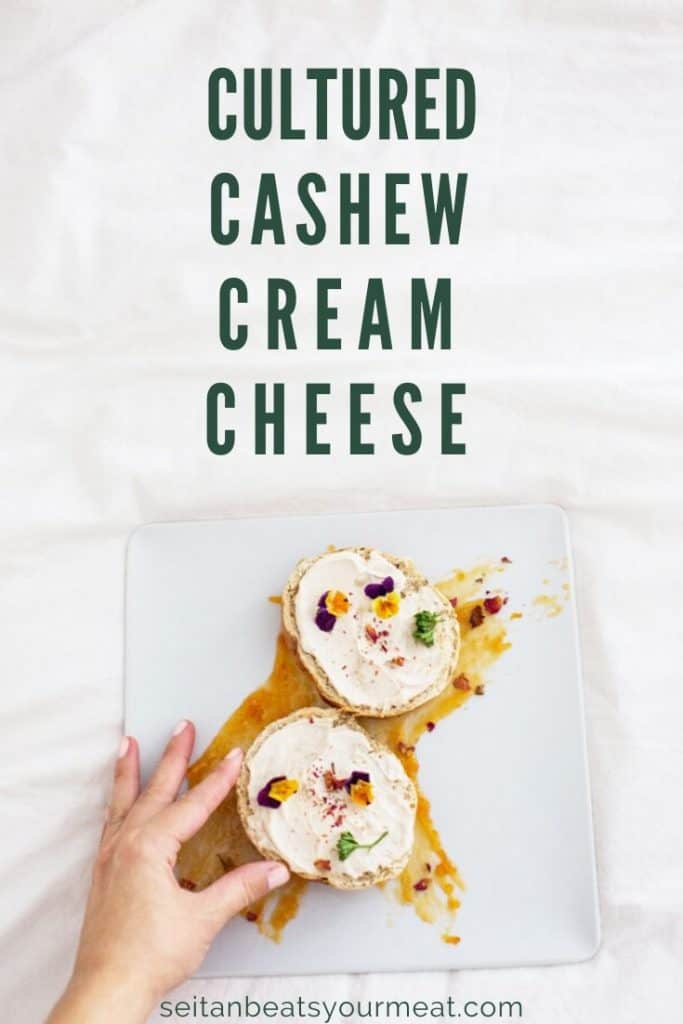