Butter pecan is one of those classic ice cream flavors that's truly decadent, and always a crowd pleaser. This recipe takes it up a notch by toasting the pecans and coating them in a buttery caramel sauce before adding them to the ice cream, so each bite is full of flavor.

The vegan butter, coconut cream, and pecan caramel makes the ice cream extra creamy so you'll want to scoop and eat it fast! There's no waiting for it to soften when you take it out of the freezer, which is a common issue with homemade ice cream, vegan or not.

You can make this recipe with or without an ice cream maker. It's definitely easier to use an ice cream maker, but if you don't have one or can't bear to buy and store yet another kitchen appliance, this is a good recipe to try. Since it's much creamier than other ice cream, the "alternative" ice cream making methods will work for this one.

You can also whip it up with beaters and a bit of powdered sugar to make dairy-free whipped cream!

The water and cream in a can of coconut milk will naturally separate over time while sitting in your kitchen.

Leave a can of full-fat (not low fat—you're just paying for watered down coconut milk) coconut milk undisturbed at room temperature for at least 2-3 days. The coconut cream will separate, then rise to the top of the can. Then stick it in the refrigerator for 24 hours. When you open the can, the coconut cream will have solidified so you can easily scoop it out. You can discard the liquid in the can, or save it for a smoothie or for cooking.

Don't have a few days to harvest your coconut cream? No problem! You can purchase coconut cream ready to go, straight outta the can! A can of coconut cream is typically more expensive than coconut milk, but you'll only need one can and won't have to bother with measuring or separating the cream and water.

I usually use the Thai Kitchen or Trader Joe's brand coconut cream.

When looking for coconut cream, make sure the ingredients are just coconut, water, and preservatives. Don't confuse it with cream of coconut, which is a totally different product made of coconut milk and sugar for use in mixed drinks.

While you don't absolutely need an ice cream maker to make homemade ice cream (see the tips near the end of the post for other methods), it definitely makes it easier. It's a great way to experiment with different types of vegan ice cream bases and add ins, and if you have kids, making their own ice cream is bound to be a memorable experience!

I have the Cuisinart 1.5 Quart Frozen Yogurt and Ice Cream Maker and it's been going strong for over a decade (I originally got it when I was writing Cheers to Vegan Sweets)! It's simple to use, comes in a bunch of fun colors, and only has a few parts, making it easy to clean.

Toast the pecans in a dry skillet for 2-3 mins until fragrant, stirring frequently. The pecans will burn quickly, so keep an eye on them.

Transfer the toasted pecans to a saucepan over medium heat and add the vegan butter, 1 ½ tablespoons brown sugar, and maple syrup.

Stir frequently until the brown sugar melts and the mixture thickens to a caramel consistency, 2-3 minutes. Transfer to a small bowl and set aside to cool. Save the saucepan for the next steps.

Combine coconut cream and ¾ cup brown sugar in the saucepan. Cook until sugar is dissolved and starts to bubble, then let simmer for 3 minutes, stirring frequently.

Stir in the oat milk, vanilla extract, and ⅓ cup of the pecan mixture. Remove from heat and let cool completely.

Put the remainder of the pecan mixture in the freezer for the duration of freezing so it doesn’t bring down the temperature of the ice cream when you add it.

Freeze according to manufacturer’s instructions.

Add pecans in the last 5 minutes of freezing, or stir them in by hand if you want to have caramel ribbons in your ice cream.

If you're going to make ice cream without an ice cream maker, I would choose this method. It's the least messy and time consuming method, and probably works the best.

When it's completely frozen, add your ice cream cubes to a food processor and blend until creamy. Transfer to a container and stick back in the freezer until ready to eat.

Remember making ice cream in elementary school science class? Well, it works...sort of! The salt and ice bag ice cream method works best if you make it in small quantities and eat the ice cream right away.

We churn ice cream to introduce air into the mix to keep it creamy and prevent ice crystals from forming and turning it into a solid block of ice cream. By frequently stirring the mixture as it freezes, you can get a similar effect. It won't be as effective as an ice cream maker, but it'll get the job done, especially for this recipe since it has so much cream and oil.

Pour the ice cream mixture into a shallow container and stick it the freezer. Every hour or two, take it out and stir it up, breaking up the frozen chunks and stirring them into the liquid. Repeat until the ice cream is frozen and has a creamy consistency.

Once you start making vegan ice cream, you won't want to stop! Here are some recipe to get you started and keep you cool.

Have leftover Girl Scout Cookies? This twist on mint chocolate chip ice cream is the best way to use your Thin Mints.

When fall rolls around, no recipe is safe from a pumpkin infusion. Luckily, it's 100% delicious and comes with a caffeine kick. This recipe calls for real pumpkin, coconut cream, and coffee steeped in non-dairy milk.

Prefer your frozen desserts on the lighter side? Sherbet is the lovechild of ice cream and sorbet—a little creamy, a little icy. This one calls for fresh cherries and canary melon.

As an Amazon Associate and member of other affiliate programs, I earn from qualifying purchases. 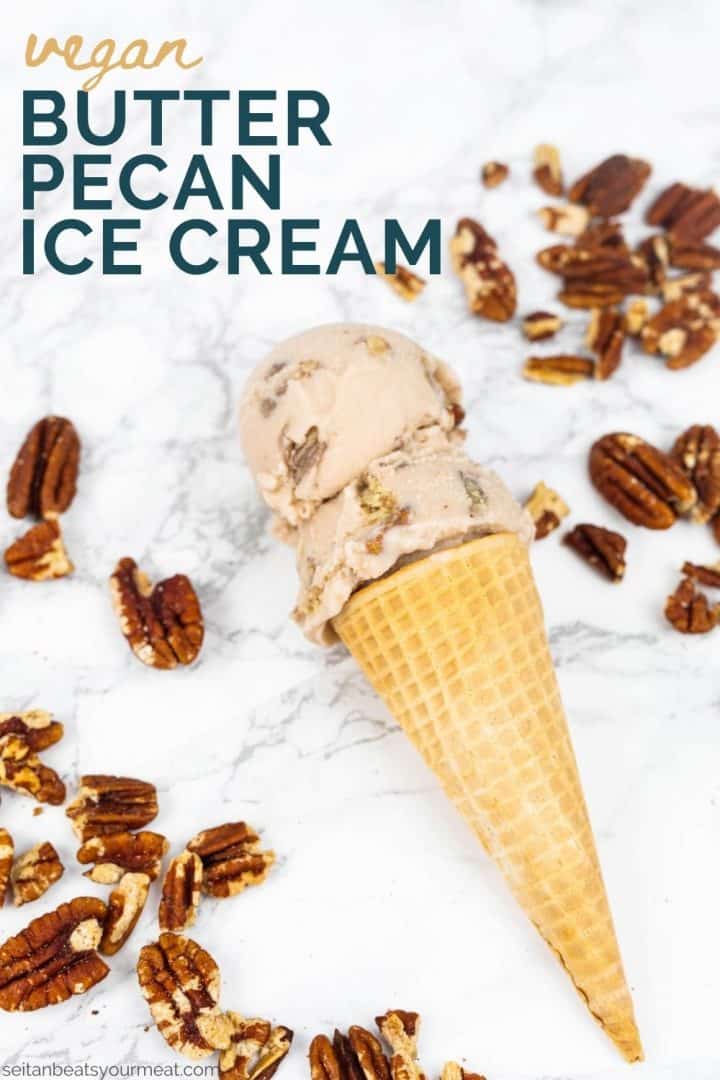