These 10 vegan pie recipes are sure to be a hit for holiday gatherings, Pi Day, and any day in between! There is a mix of sweet and savory pies, as well as a pie crust recipe to get you started.

I love pie, but making the crust, the filling, and possibly a lattice crust is a whole production. There's a good reason we usually only eat pie on the holidays. But I propose we have pie on more holidays. There's Thanksgiving, Christmas, Pi Day, and maybe Easter? What about New Years pie? Or Valentine's Day? I had apple pie for my birthday once, and that was great.

I think we need to make vegan pie more accessible and easier to make, and we'll get more pie! If you want to make a lattice crust from scratch, be my guest, but there are so many prepared vegan pie crusts on the market that all you have to do is make a filling and bake!

I compiled a list of vegan pie recipes, both savory and sweet, so you can start adding more pie to your life. First, let's clear up some Vegan Pie Rumors™.

Is pie vegan? Which pies are vegan?

It depends! Often times, store bought fruit pies are made with vegetable shortening instead of butter, so be sure to check the apple pies at your local grocery store in the bakery and frozen section.

Any pie can be made vegan so you won't be missing out on pie on Thanksgiving as a vegan or any other time.

Can you buy vegan pie crust?

Yes! Most store bought graham cracker pie crusts are accidentally vegan. Just be sure to check the ingredients for honey, milk, and butter.

Flaky pie crusts for fruit and pumpkin pies are not always vegan, but double check the options at your supermarket to see if one happens to be vegan (by using vegetable shortening or oil instead of butter). I included a vegan pie crust recipe at the end of the list if you'd like to try your hand at making the crust yourself.

A popular dessert in the UK but relatively unheard of in the US, banoffee pie is a banana toffee pie baked in a biscuit (cookie) or graham cracker crust. I've actually never had it, but maybe my first one will be this Chocolate and Coconut Banoffee Pie from Anna Banana!

I made this Peach Pie recipe during Mad Men Vegan MoFo 2013, a series of blog posts where I made recipes inspired by the show Mad Men. Despite its cinematic qualities and glamour, it's really an honest to goodness fruit pie. While the filling calls for peaches, you could swap the fruit out for apples, blueberries, cherries, or another filling of your choice.

Another type of pie I've yet to try! This Custard Pie from Connoisseurus Veg uses silken tofu and full-fat coconut milk to create the "eggy" vegan custard baked into the pie.

This gorgeous Chocolate Mousse Pie with Berries from Rainbow Nourishments has a pecan brownie crust(!!) and is topped with raspberry chia jam. It sounds absolutely decadent.

Grasshopper pie is a chocolate mint cream pie in a cookie crust. This no-bake version from Dianne's Vegan Kitchen is made with dates and nuts, cacao nibs, and fresh mint.

I broke out the pi cookie cutter to garnish this vegan version of a lemon meringue pie, using aquafaba for the meringue. The pie filling is lemony tart, and it's topped with baked chickpea meringue.

So most people are familiar with the idea of mincemeat pies, but do you actually know what's in them? Maybe I'm projecting, but I couldn't tell you what's in a mince pie. Turns out, they don't typically contain meat and the "mincemeat" refers to the liquor-soaked fruit and nuts inside. These mini mince pies from Wow It's Veggie deliver just that, in a cute little package!

When I think of pecan pie, I think of older relatives having a slice on holidays. It doesn't seem like a young person's pie. Joke's on me because pecan pie is delicious. And here comes My Quiet Kitchen to make it even better with salt and chocolate! This Salted Chocolate Pecan Pie is sure to wow everyone on Thanksgiving.

These savory vegan pie recipes will all you to live the dream of eating pie for dinner. Did anyone else used to eat frozen pot pie a lot as a kid? I haven't had one in years... *takes down new recipe idea*

Shepherd's pie is SO easy to make. It's just veggies, some kind of meat alternative or lentils, and gravy topped with mashed potatoes and baked. That's it. You could even make it as a weeknight dinner since it comes together quickly and you only need to dirty two pans. My Vegan Shepherd's Pie is made with seitan and veggies in a vegan "beef" gravy and topped with Garlic Mashed Potatoes.

I've mentioned before that I'm not a big fan of mushrooms so you won't find many mushroom recipes on my blog, but I'm happy to share recipes from other bloggers for you mushroom lovers. Especially when they're as beautiful as this Vegan Mushroom Onion Lentil Pie from Quite Good Food. It calls for fresh rosemary, sage, and balsamic vinegar, which are some of my favorite flavors. I'll have to try it out sometime and replace the mushrooms with another filling.

I'd be remiss not to include a crust recipe to bake your pies in! This flaky vegan pie crust recipe from Vegan Blueberry is made with ingredients you likely already have in your pantry: flour, water, and oil. You can use it for sweet or savory pies since pie crust usually has a neutral flavor with very little sugar.

This recipe also calls for wheat germ, but she says you can leave it out and simply replace with more flour. I imagine including the wheat germ would give it a nice nutty flavor. 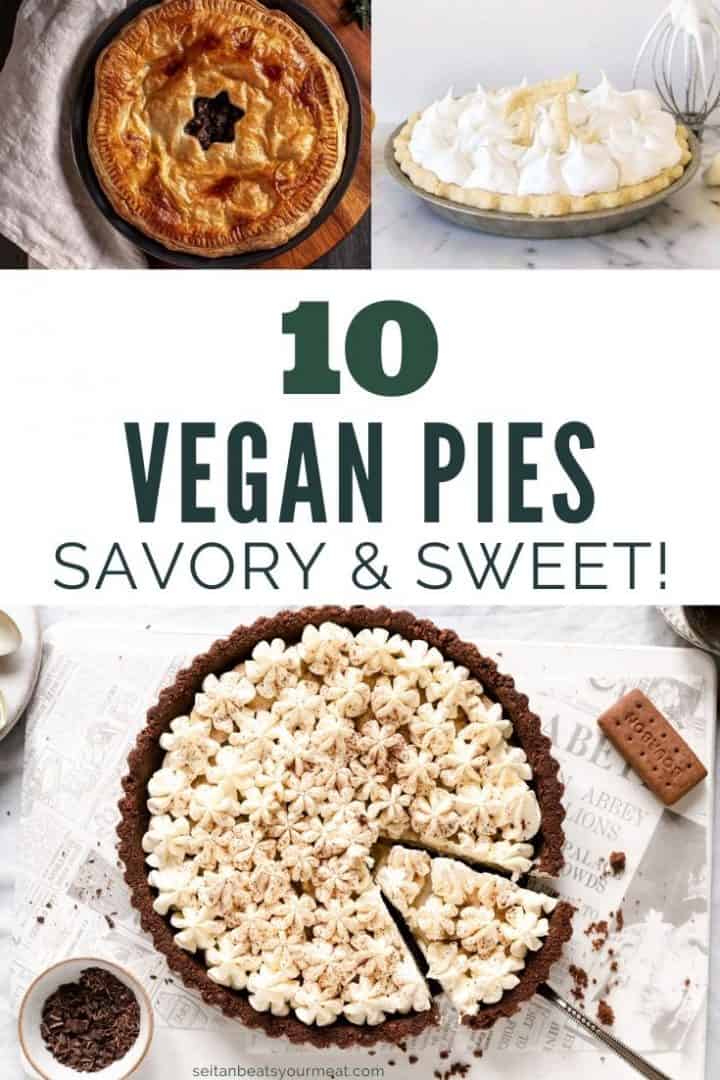 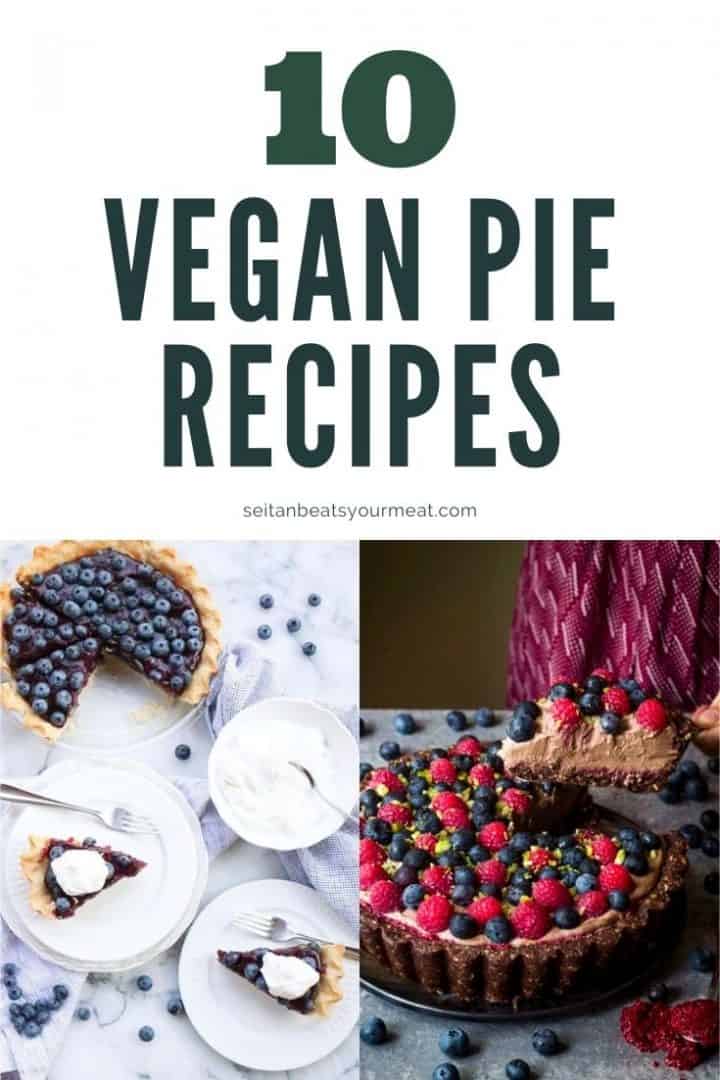 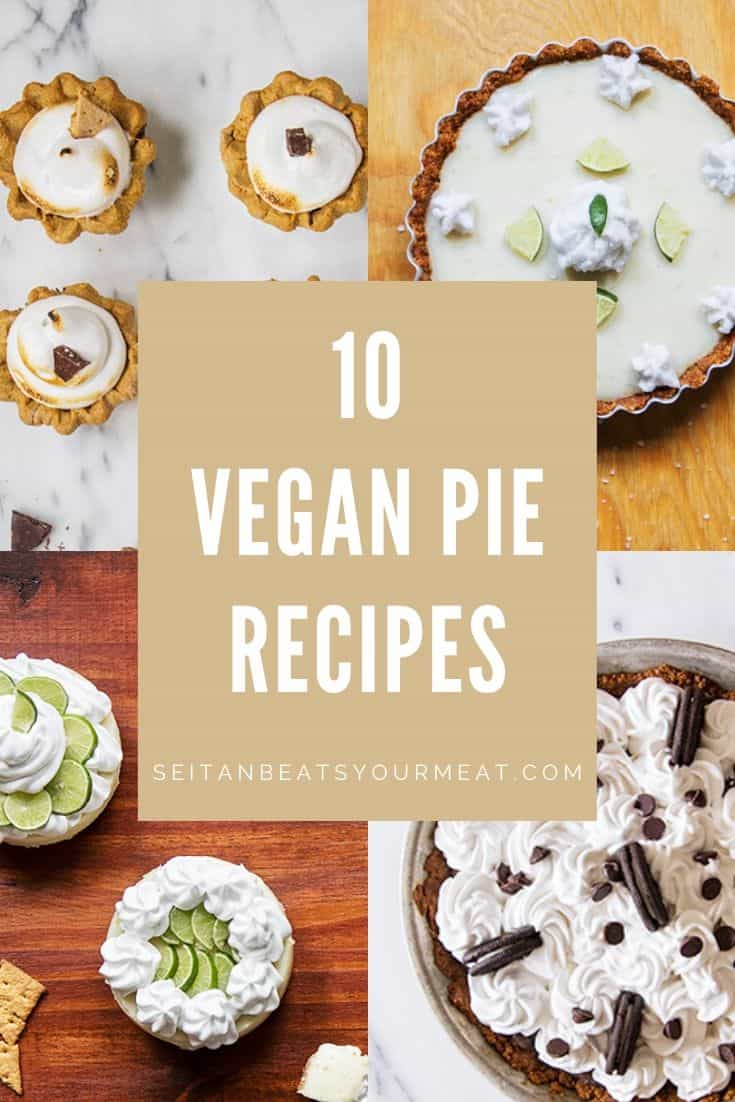